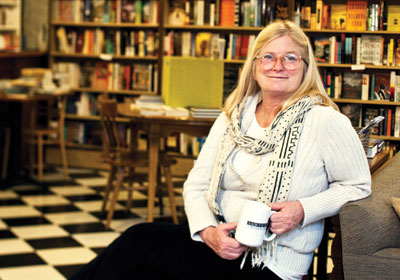 SubText: A Bookstore Finds Its Legs

Or how an indie bookstore resembles a good neighborhood bar.
December 01, 2012

SubText: A Bookstore launched June 13. “It was a good day to open a small business in a dying industry,” says Sue Zumberge, the owner of the modest-sized bookstore, located in the basement of the Blair Arcade on St. Paul’s Cathedral Hill.

Zumberge serves up that quote with a hearty dollop of irony. She doesn’t really think that bookselling is moribund. It is challenging, though: A mid-October visit to SubText’s space revealed a number of still-barren shelves. Its sole full-time employee, Zumberge continually interrupted a conversation with this writer to help customers.

We’ve heard the story: Who needs bookstores when there’s Amazon.com? Look what happened to once-mighty Borders and Waldenbooks, the enormous local independents like Odegard and Hungry Mind.

But there’s more to the story: The Twin Cities remains home to several independents. In St. Paul, there’s Garrison Keillor’s Common Good Books, which operated in the SubText space for several years before moving to street-level digs near Macalester College; there’s also the small but sturdy Micawber’s in St. Anthony Park. In Minneapolis, author Louise Erdrich has been running Birchbark Books near Lake of the Isles.

These stores aren’t printing money; most aren’t even profitable, but they have passionate patrons. Zumberge, a bookseller for more than three decades, compares a bookstore to “a good neighborhood bar”—it’s as much hangout as merchant.

Another comparison might be to an ecosystem. Before opening, Zumberge polled neighborhood locals about what they’d like to see in the store. Zumberge tapped knowledge of her corner of St. Paul to create a carefully “curated” selection of fiction, history, biography, poetry, and local interest. Nina’s Coffeehouse upstairs directs customers to the stairway that leads to SubText.

Another key element of the ecosystem is legendary local bookseller David Unowsky, who now organizes readings and other promotional events. Zumberge notes that many customers own Kindles and other electronic readers. But they still like to buy real books.

“We’ll never lose that tactile need, the aesthetic experience of the texture” of bindings and pages, she says. We can only hope.