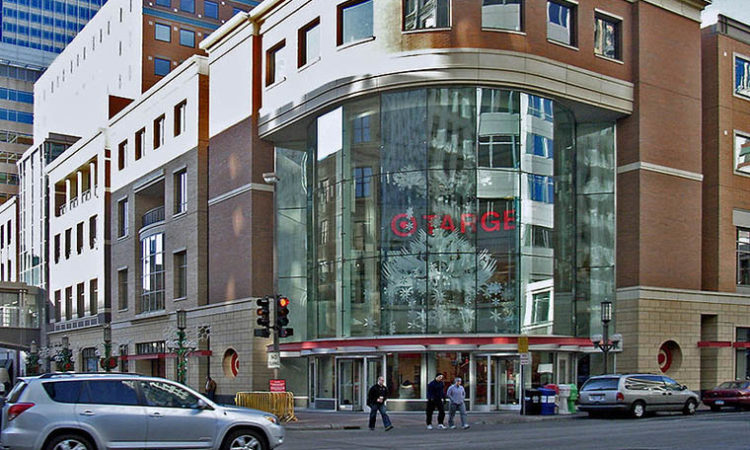 Nicollet is home to three Fortune 500 companies: Target, Xcel Energy and US Bank. Image by Payton Chung via Wikimedia Commons.

Nicollet Avenue came in 28th on JLL’s 2017 “Most Expensive Streets,” placing it ahead of Sacramento’s Capitol Mall.
By Jared Goyette
December 12, 2017

Fresh off the grand opening of its $50 million, two-year remake, Nicollet Avenue in downtown Minneapolis got an endorsement of sorts this week when real estate consulting firm JLL ranked the thoroughfare among the most desirable—and ultimately most expensive—streets for commercial real estate in the country.

Nicollet Avenue came in 28th on JLL’s 2017 “Most Expensive Streets” study, with rents averaging $35.89 per square foot, putting in in front of Sacramento’s Capitol Mall and Atlanta’s Peach Tree Road.

The ranking is roughly in line with how Nicollet Avenue faired in JLL’s last expensive street study in 2015, when it had the 28th spot.

“In the eyes of both investors and employers, Nicollet Avenue offers the full benefits of a Minneapolis CBD location,” said Steve Buss, JLL Capital Markets managing director. “The benefits include a combination of a high density of restaurants and hotels, access to mass transit routes, including a light rail stop at 5th and Nicollet, and the ground level retail along the newly renovated Nicollet streetscape.”

Kevin Lewis, the executive director of the Greater Minneapolis Building Owners and Managers Association, said that the downtown business district as a whole has seen the addition of about 2 million square feet in new development over the last few years, with Well Fargo’s East Towers near the U.S. Bank stadium adding a combined 1.1 million square feet of space, and the wooden, seven-story, T3 building in the North Loop adding another 220,000.

From a property owner’s perspective, Lewis said that part of the appeal of Minneapolis is that it has a diverse economy, meaning a a decline in one industry doesn’t cause a collapse in property values, as it can in other cities.

“We don't suffer quite as much because we have a pretty diverse economy here. The tenants represent a wide range of businesses,” he said.

Nicollet is home to three Fortune 500 companies (Target, Xcel Energy and US Bank), and Lewis indicated that rents tend to be higher closer to the mall, with higher floors, and better views commanding the premium rates. Retail space on the mall has also become a center for discount stores in recent years, the latest being Nordstrom Rack, which opened in September, joining Target, Marshall’s and Saks Off Fifth, all within close walking distance.

The next planned addition is of a different flavor: Twin Cities resident and celebrity chef Andrew Zimmern is helping to bring a a 40,000-square-foot, multi-faceted food market at the Dayton’s Project, a massive redevelopment effort underway at the old Macy’s building.

“Nicollet Mall is also a hub of activity, which is why it continues to be the strongest address in the Minneapolis CBD,” said JLL managing director Jon Dahl. “It offers ease of access through its pedestrian-friendly walkways and high number of skyway connections, as well as a wealth of other activities taking place on the street, such as the downtown farmers market.”

US Most Expensive Streets 2017 – JLL by Jared Goyette on Scribd