Study: 1 in 5 Females Are Now “Women Of Influence”

A “woman of influence” is defined as being active in major investment decisions, having a good understanding of financial products, and having an interest in learning about financial matters.
July 26, 2013 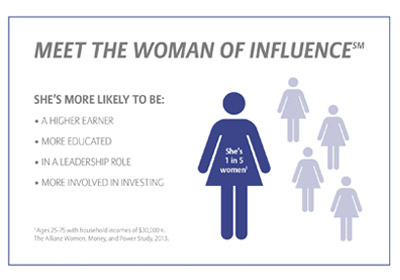 Allianz Life Insurance Company released a study Monday indicating that women who are more involved in financial matters are more confident about saving and investing, among other things.

According to the Minneapolis-based insurance giant, one in five women constititues a “woman of influence”—such a woman is defined as being active in major investment decisions, having a good understanding of financial products, and having an interest in learning about financial matters.

“The compelling thing about the ‘woman of influence’ is she doesn’t necessarily fit the typical ‘power woman’ profile of someone with a six-figure salary and an MBA,” Katie Libbe, vice president of consumer insights for Allianz Life, said in a statement. “While some are that, the ‘woman of influence’ can just as easily be a stay-at-home mom who is fully engaged in household finances and committed to actively managing her family’s financial future.”

After determining which women were “of influence,” the study compared those women’s survey responses with the net responses from all women surveyed. The study was conducted in December 2012 with more than 2,000 women, ages 25 to 75, with household income of at least $30,000 a year.

The study also found that “women of influence” tend to have more earning power (making an average of $57,000 a year versus $48,000 for all women surveyed), a higher incidence of post-graduate education (26 percent completed a graduate degree versus 20 percent for all women surveyed), and more success in the workplace (they are 50 percent more likely to be a business owner and 80 percent more likely to serve at the director or vice president level within their company than the average woman).

“Women of influence” are also much more likely to have started saving for retirement than the average respondent—with only 1 percent saying they have not begun saving versus 12 percent of all women surveyed.

“We encourage women to evaluate their own relationship with their finances to determine where they stand and what steps they need to take to become more confident with financial and retirement planning,” Libbe said. “It’s important to remember the ‘woman of influence’ doesn’t have to be career-focused and high-earning, although the study found that many do have more professional success.”

Click here to see the full results of the study.