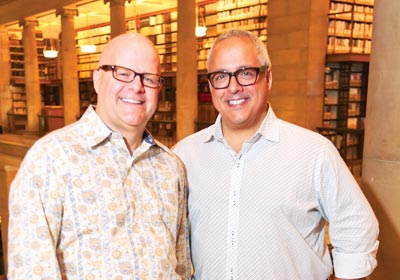 Studio/E and the Meeting of Many Minds

Studio/E helps professionals think afresh in a time when the old approaches to success don’t work as well as they used to.
November 04, 2012

You could think of Studio/E, which convenes in the James J. Hill Reference Library in St. Paul, as a kind of intellectual day spa for local leaders to discover fresh approaches to developing ideas and cultivating support for their plans. In launching Studio/E this summer, co-founders Nate Garvis and Tom Wiese wanted to help leaders—whether in business, health care, nonprofits, or the arts— navigate a world where past solutions don’t apply.

“Everyone is having trouble navigating change,” says Garvis, who became an entrepreneur in 2010 after nearly 18 years at Target—he left the big-box retailer as vice president of government affairs and senior public affairs officer. “We work with about every sector, and there isn’t a sector that isn’t undergoing massive change right now.” The rapid change stems from all manner of technology, the commoditization of products, global politics, and more. The common consequence is the upending of traditional ways of problem solving, winning buy-in from peers, and implementing solutions. Garvis, now a consultant who has his hands in civic discourse, philanthropy, innovation, and more through several initiatives, partnered with longtime pal Wiese to create Studio/E. Wiese runs WieseLaw Studio in Plymouth, where he specializes in business and entertainment law.

Wiese and Garvis devised a cohort model in which 24 highly accomplished people who are “interesting and interested”—in Garvis’ words—come together quarterly to share their common challenges, learn from each other, and master experts’ approaches to generating ideas.

“Hybridity is a really important concept right now,” Garvis notes. “If you put lawyers together, you’ll get lawyer approaches. But if you put a lawyer together with a performance artist you’ll have different thinking going on. Every sector we deal with is full of leaders who are deeply intelligent and deeply experienced but in ways that are very narrow, and that creates insular approaches.”

Starting with two cohorts this summer (which will meet again this fall), Garvis and Wiese filled the Studio/E rosters through word of mouth and referrals. They will power up two more cohorts in January. Participants apply and must be accepted, then pay $6,250 for the yearlong program. Its first participants hailed from a diverse group of professionals in business, health care, the arts, religion, academia, nonprofits, media, entertainment, and government.

Studio/E’s foundation has been built largely from the academic rigor of Babson College, ranked for nearly two decades No. 1 for teaching entrepreneurship by U.S. News and World Report. Wiese and Garvis, a senior fellow at Babson, brought in two Babson instructors, as well as other specialists in creativity, team building, and leadership, to stimulate discussion.

Named with the E for entrepreneurship, Studio/E aims to expand the concept beyond venture creation and help people apply fresh thinking to their organizations. The E also could stand for experiential learning, because Studio/E isn’t a lecture hall. Instead, they get to know each other through small-group activities and exercises to learn the art of “creAction,” a Babson concept that emphasizes acting upon one’s ideas in order to refine them.

Blois Olson is just the type of person Studio/E wants to work with. Olson started his first public affairs and public relations agency at the age of 26. After working at Bloomington-based Tunheim Partners, he’s back at the helm of his own firm—Fluence Media, a Minneapolis-based content marketing agency. He joined a Studio/E cohort, attracted by the access to Babson thinkers, top Twin Cities leaders, and an interactive learning environment to guide his thinking about his new venture.

“When I started my first agency 20 years ago, there was no place for creatives or forward thinkers to gather and bounce ideas off of,” Olson says. Providing that place is Studio/E’s No. 1 asset. “And No. 2 is the exercise where you think about your big idea and how you make it happen,” Olson says. “I have ideas every day, so the idea of having a discipline to make me focus and do peer review into those ideas is valuable.”

Though tuition covers one year of programming, the partners may extend the experience to three years. “We need unique ideas, and we need more ideas,” Garvis says. “Studio/E gives people practice to develop more ideas and put more relevance into the ideas.”