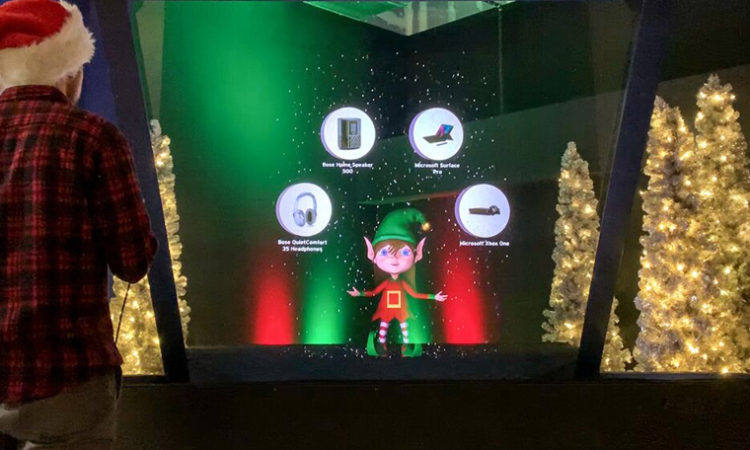 Stuck on What to Gift? Mall of America’s Hologram Ellie the Elf Offers New Way to Shop

Powered by hologram software from California-based company VNTANA, the “industry-first” Ellie the Elf is a 3D-animated chatbot stationed at the mall’s Holiday Cottage on North, where it offers gift recommendations, directions, and more.
By Amanda Ostuni
December 11, 2018

Mall of America took a page out of Santa’s playbook and enlisted an elf – a holographic one, that is – to help out shoppers this holiday season. The elf, named Ellie, is a 3D shopping hologram concierge powered by software developed and patented by Los-Angeles based mixed reality company VNTANA.

The collaboration, which is being called an industry first, aims to make the holiday shopping experience more engaging, fun and efficient at the mall.

“We are really excited [because] we really think this helps create a more personalized consumer experience and bridge that [gap between the] online and offline shopping experience,” Ashley Crowder, CEO and co-founder of VNTANA, tells TCB.

Mallgoers can use Ellie as a gift-giving resource. A guest can find her at the Holiday Cottage on North, step up to where she is housed, and choose a category such as “teen” or “husband.” From there Ellie can help narrow down gift ideas further, offering suggestions for gadgets, games, or an array of other types of gifts, and even direct a user to where to buy a certain item in the Mall of America.

What’s more, Ellie is available for selfies — a person’s own image can become holographic when standing next to her — and she’ll dance with guests, too.

“No matter what, if it’s an adult or a kid, everyone starts to act like a kid and dance around and have a lot of fun with it, which is really fun to watch,” says Crowder.

Sarah Townes, VP of marketing at Mall of America, says average engagement time since Ellie first appeared on Black Friday is about four minutes per interaction, and it’s served as a great option for a shopping break. Though Ellie draws significant interest, Townes says there’s been no crowd control issues thanks in part to Ellie’s location near the food court where lounge seating is aplenty.

Ellie marks the first time VNTANA’s software has been used in a retailer application.

VNTANA, which has been in operation for six years now, has built its software for use as a building lobby concierge, and at Fortune 500 companies including Pepsi, Nike, and Lexus. VNTANA’s software is also friendly with existing chatbots — Microsoft Azure, Amazon Alexa, Satisfi Labs, IBM Watson — and brings those chatbot to life in the animated form of a customizable avatar.

In the Mall of America’s case, the software is linked to the mall’s Satisfi Labs chatbot, and Ellie the Elf is the avatar Mall of America and VNTANA devised. Factoring in the time of year, Ellie felt like the perfect choice to “personify this gift-giving chatbot,” Crowder adds.

The creation of Ellie falls right in line with Mall of America’s recent efforts to create a more engaging and unique shopping experience, especially for the holiday season. Last year, the mall launched their chatbot, but as a cyber chat-based function. It could provide directions and answer questions, although via the mall’s app, website, on Facebook messenger, through robotic installations, and other channels.

This year, in addition to Ellie, Mall of America teamed up with Vancouver-based Imagination Park Entertainment’s wholly-owned subsidiary XenoHolographic to create an Augmented Reality Experience that shares a holiday story with mallgoers via their smart phones, and encourages users to share their holiday experiences on social media.

“The Mall of America is all about experiential retail and bringing unique experiences to our guests with each and every visit,” says Townes.

With Ellie, in particular, Townes adds, “It’s just about creating the essence of the holiday season and surprising and delighting guests… while providing a valuable resource along the way as well.”

Ellie will be on hand to help mallgoers through December 24.