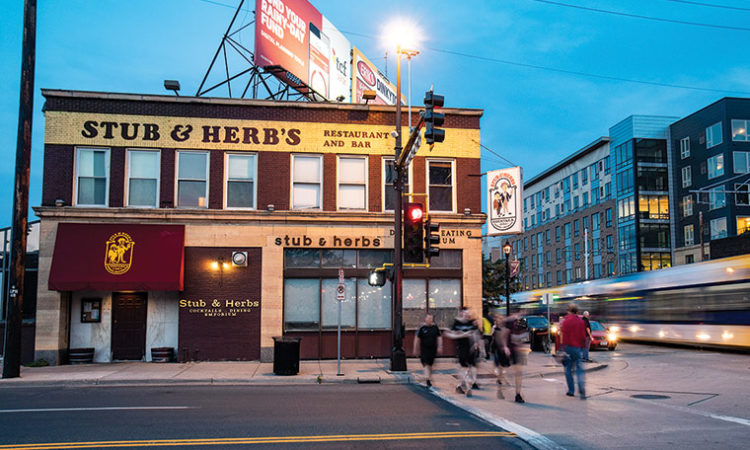 The restaurant's sale augurs long-term change near the U.
By Amanda Ostuni
October 01, 2018

When word got out that Stub & Herb’s, a nearly 80-year-old watering hole near the University of Minnesota, was sold earlier this year, generations of regulars went into mourning.

Twitter user Pat Lund said it’s been “part of [his] sports life for nearly 50 years.” Tom Sager tweeted “Please don’t leave, I want to take my kids there one day.”

However, reports of Stub & Herb’s demise are premature.

The University of Minnesota Foundation (which is independent of the university) purchased the Stub & Herb’s and adjacent Jimmy John’s parcels, located at the corner of Oak Street and Washington, for $7 million. But the foundation has no immediate plans for the site—or any of its recent land acquisitions totaling about 15 acres—and Stub & Herb’s has a two-year lease with the option of renewing for another five.

The foundation’s long-term goal is to create “an important gateway between the university and the community,” says Sarah Harris, managing director of the University of Minnesota Foundation Real Estate Advisors (UMFREA). “We’re not trying to replace what’s here, we’re trying to make it better.”

Harris’ goal is to identify strong existing assets and what’s missing in the area at the gateway to Stadium Village. Ideas include: makerspaces, offices for university corporate research partners, and student-linked startups, housing for faculty and their families, and enhancing the public space between the river, stadium, campus, and neighborhoods.

UMFREA’s buying spree was spurred by recent developer activity and a subsequent fear of losing the gateway to what it regards as unfavorable uses, like residential-only projects. That’s partly why Stub & Herb’s owner Josh Zavadil sold to the foundation.

“I think their idea for the neighborhood is good,” says Zavadil. “They have a long-term vision, instead of just ripping things down and putting up another condo building.”

Zavadil wasn’t looking to sell, but after years of being approached by developers, he received an offer too good to pass up. So he let the foundation match the offer—with a bonus that Stub & Herb’s could remain for now and would be invited to the conversation about the future.

“If Stub & Herb’s wants to stay,” says Harris, “and the community wants them to stay, we’d be crazy not to listen to that.”