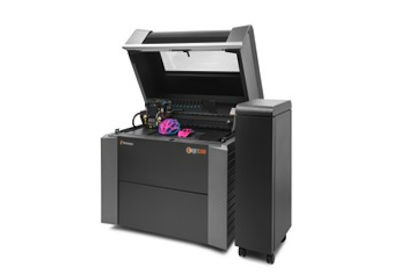 The company recently announced the launch of a 3D printer that can combine multiple colors and materials in a single prototype.
February 06, 2014

On Monday, Stratasys, Ltd., unveiled what it bills as the first-ever color “multi-material” 3D printer, which it claims could transform the way businesses design, engineer, and manufacture new products.

The 3D printer design and manufacturing company—co-headquartered in Eden Prairie and Rehovot, Israel—said that the Objet500 Connex3 Color Multi-material 3D Printer is the first of its kind to use color in conjunction with various materials—including rubber, polypropylene, and high-temperature resistant plastic.

Meant for high-capacity production, Stratasys said that the printer is intended to assist designers, engineers, and manufacturers in creating model, mold, and part prototypes that match the characteristics of production parts.

The Objet500 Connex3 printer is the latest technology in a rapidly growing sector. 3D printing has grown so significantly in recent years that the 2013 International Consumer Electronics Show—at which Stratasys debuted its “Idea Series” of various 3D printers and technologies—consisted of 3,000 square feet of additional space solely to accommodate 3D printing exhibitors. And according to Forbes, major 3D printer manufacturers (including Stratasys) nearly doubled their worldwide shipments in 2013.

Round Rock, Texas-based Dell, Inc., is also tapping into the growing 3D printing market. The computer technology giant announced Monday that it will sell Stratasys' MakerBot Replicator 3D printers and scanners to its small- and medium-sized business clients.

Stratasys’ Objet500 Connex3 printer—which is about 19 by 15 by 8 inches—is compatible with Windows 7 and 8 with 64-bit processors. It uses “triple-jetting technology,” which combines plastic and rubber materials, a gel-like support material, and combinations of three base colors to create a colored prototype. The printer can incorporate up to 46 colors in one prototype. Stratasys said that the printer’s broad color spectrum combined with its multi-material printing capabilities helps manufacturers create a product prototype in a short amount of time without assembly or painting—thus allowing companies to bring products to market faster.

“As the first true multi-purpose 3D printer, we believe the Objet500 Connex3 Color Multi-material 3D Printer is in a league of its own, enabling you to dream up a product in the morning and hold it in your hands by the afternoon, with the exact intended color, material properties, and surface finish,” Igal Zeitun, Stratasys’ vice president of product marketing and sales operations, said in a statement.

Stratasys said that Waterloo, Wisconsin-based Trek Bicycle Corporation is one of its customers using the new printer. Engineers at the bicycle manufacturing company use the printer to create test prototypes of bike-chain stay guards and handlebar grips before actual production.

Meanwhile, Stratasys also announced Monday that it appointed a new executive to oversee its operations in Japan.

Katayama previously worked within the industrial machinery importing industry and has approximately 20 years of experience working with and managing 3D printing manufacturing companies in Japan and China.