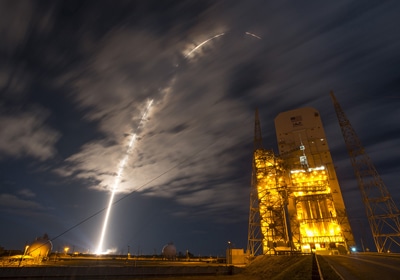 The potential applications for 3D printing technology reached new heights on Wednesday after a rocket partially built through the use of a Stratasys 3D printer successfully launched into space.

By utilizing Stratasys’ Fortus 900mc Production 3D printer, ULA said the Minneapolis-based tech and manufacturing company assisted in both engineering and production tooling processes, as well as aiding ULA in the printing of brackets, nozzles, panel close-outs and other parts used in the rocket’s construction.

“We worked very close with Stratasys and they basically helped us to determine certain quality standards,” Andrea Casias, ULA’s materials process engineer, said in a video. “What they are doing is making sure that the product is number one acceptable for use, has the appropriate properties acceptable for flight application and they are making sure that every single filament that we get is traceable all the way back to the raw material.”

Parts were constructed from a highly temperature resistant thermoplastic known as ULTEM 9085, a much lighter replacement to the metal components used in past rockets. Engineers at ULA said the advantages of additive manufacturing, or the process of 3D printing parts layer-by-layer, substantiate the use of 3D printers in spacecraft construction moving forward.

“Additive manufacturing adds a whole different facet to the design process,” Casias said. “What you can do is basically build really complex geometries and we can reduce our weight, which is really important in the disposable launch vehicle business. In a lot of cases, because we do have the ability to use this high-strength thermoplastic, we’re actually replacing a lot of metallic applications with plastic applications because it’s substantially less expensive.”

Previous designs of ULA’s ducting system used in the rocket’s payload fairing required the assembly of 140 parts and a significant installation time. Through its collaboration with Stratasys, ULA said it was able to consolidate the ducting system to 16 parts, drastically reduce the installation workload, and cut costs by 57 percent.

“It’s been impressive to see how ULA has innovated with industrial 3D printing,” said Scott Sevcik, director of business development for aerospace and defense at Stratasys, “and we are excited to continue working with them to push the technology further.”