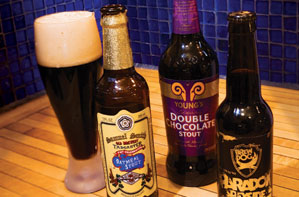 Take a cue from tsarist Russia, where “imperial stout” gained a following as a warming drink: Stout beers are made for winter—because of their heartiness, but also their sweet, nutty, malty flavor profile that pairs well with many of the season’s foods.

Stouts are dark and heavy, and belong to the category of beers called ales. Made with a top-fermenting yeast that typically gives fruity flavors, they’re a contrast to the often more bitter, bottom-fermented lagers.

A predecessor is bittersweet porter, made for the freight handlers, or porters, of London’s shipyards. Accentuating the sweet notes of porter’s roasted malts by keeping them in the kiln longer—think of the way onions go from sautÃ©ed to caramelized with longer cooking—led to a “stouter” brew that was richer and often higher in alcohol content.

Two of the most popular stouts around the globe are Ireland’s Guinness and Murphy’s. However, stouts include a world of diversity. Here are three that are truly standouts and worth pairing with holiday party fare or winter meals.

In oatmeal stouts, one-third of the malted barley is replaced with malted oats. When these beers were popular in the late 1800s, they were marketed for good nutrition, especially to lactating mothers. Samuel Smith’s Old Brewery in Tadcaster, England, was among the first commercial brewers in modern times to revive this style of beer when it did in 1980. The oats add body and smoothness. The bittersweet finish complements a dark flavorful bread and aged Stilton cheese, a bowl of steamed clams or oyster stew, or, in keeping with stout’s working-class roots, a ploughman’s lunch. Samuel Smith Oatmeal Stout, $10 for a four-pack of 16-ounce cans at Thomas Liquor, 1941 Grand Avenue, St. Paul.

Chocolate stout can be made without any cocoa, as malting and roasting barley can bring out flavors that mimic chocolate. But Young’s Double Chocolate Stout is made with bits of real chocolate. Wells & Young’s Brewing Company in Bedford, England, achieves a beer that smells, looks, and tastes like milk chocolate. It comes in bottles, but is better from cans, which have a small liquid-nitrogen widget inside so that when you pour the beer into your favorite pint glass, you get a sustained, creamy head. This stout could be a good dessert in itself, but it also pairs well with sweets. Try it with a peppermint and chocolate cookie. Young’s Double Chocolate Stout, $10 for a four-pack of 16-ounce cans at First Grand Avenue Liquor, 918 Grand Avenue, St. Paul.

Thrale Brewery in London was one of the first to brew an imperial stout, for export to the court of Catherine II of Russia. Today, “imperial” signifies a stout in which everything is jacked up: the roasting of the malt, the richness, and the alcohol, which usually ranges above 7 percent of content.

BrewDog in Fraserburgh, Scotland, produces a Paradox brand that adds another degree of intensity to the flavor by aging the stout in whisky barrels. The beer is infused with the smokiness and peat of Macallan, Glen Moray, or Ardbeg, to name just a few; Speyside’s whisky barrels throw out plenty of fudge, spice, and citrus fruits on the nose, just like many of its Scotches do. Try Paradox Imperial Stout with aged cheddars or goudas, or with roasted lamb. Jim Sebring, the beer buyer at Blue Max in Burnsville (a store with an especially impressive selection of beers), says that despite the high price, he has trouble keeping Paradox in stock. Paradox Imperial Stout, $11.88 for an 11-ounce bottle at Blue Max, 14640 10th Avenue South, Burnsville.