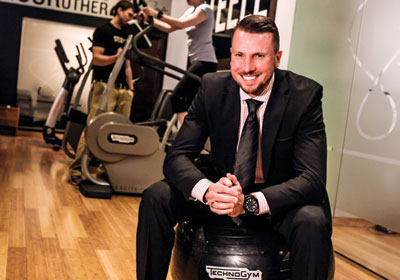 “If I’m not running around with my hair on fire, I’m not having fun,” says Smiley, 35. “The more things I have to do, the better I am and the better I seem to execute.” An entrepreneur since high school (he started a T-shirt company to pay for his first car), and former Division I swimmer at the University of Virginia, Smiley has plenty of competitive fire. But flexibility has been just as important to the Golden Valley company’s success. From the beginning, Smiley’s vision has been to help clients become fit and healthy by delivering the five-star personal training services they want, exactly when and where they want them.

Personal training sessions run $69 to $99 an hour. Other fitness clubs around town average $100 an hour, plus a monthly membership fee. “We want to give you an elevated experience for an affordable price. That’s our value proposition. We’re going to take care of you and give you all the amenities you want,” says Smiley.

Steele clients have the flexibility to work with a personal trainer at home, at work, with their kids, or at a Steele club. They also can choose from a menu of options including nutrition advice, equipment consultation, and apparel, all tied together with concierge-level customer attention.

That personal approach is a good match for today’s fitness customers, says Pamela Kufahl, editor in chief of Overland Park, Kansas–based Club Industry magazine. While big-box health clubs have amenities like child care, swimming pools, and group fitness classes, they sometimes leave customers to meet wellness goals on their own. “The majority of small club operators that have facilities under 20,000 square feet are doing well with personalized attention and making sure people get results,” Kufahl says. Steele added high-end equipment sales and consultation to its menu of services in 2011 after Chicago-area equipment maker Life Fitness approached the company. Steele’s staff helps customers pick the right elliptical machines, treadmills, bicycles, and strength training systems to meet their fitness goals and needs.

Steele Fitness now has about 8,000 clients at five Twin Cities clubs and 15,000 corporate customers at Target headquarters in Minneapolis, where Steele partners with the retail giant on its employee wellness programs. Smiley says the relationship came about after Target approached Steele last year; he’s now discussing similar programs with several other corporations.

Smiley won’t disclose financials for Steele, which is privately held, but says revenue has doubled every year since 2008. The company now has 90 employees and is looking to hire another 20 to staff the clubs and new corporate business.

Steele Fitness ventured beyond the Twin Cities in 2006, opening in Scottsdale, Arizona, but Smiley sold that part of the business in 2010 (around the same time, the company also switched its fleet from BMWs to Mini Coopers to cut costs). Smiley says that he and his wife moved to Arizona for a while, but changed their minds about living there and came back. By then the company was going gangbusters in Minnesota, so it made sense to focus his efforts here.

He never gave up on the idea of going national, however, and the company’s latest partnership with apparel maker Under Armour gives him a new vehicle to do so. In May, Under Armour is scheduled to open its first stand-alone store in Minnesota within the Steele Fitness location at 50th and France in Edina. The store will offer men’s, women’s, and children’s clothing and footwear, and fitness technology, as well as co-branded Steele and Under Armour merchandise.

It’s a shift for Steele, which in response to customer requests, has offered a mix of apparel brands, including lululemon, Bliss, and Falke, since 2006. The company aims to convert Steele’s other locations—in downtown Minneapolis, Wayzata, St. Paul, and Excelsior—to the Under Armour model by late summer, according to spokeswoman Lily Smith, and expects to announce some new locations by the end of the year. Working with a single vendor will simplify that expansion, Smiley noted.

Some might wonder why Baltimore-based Under Armour, which had $1.8 billion in sales last year, would pick a small private company like Steele as a partner. It’s simple, says Smiley. “We have a growth plan that is astronomical, and they bought into it.”