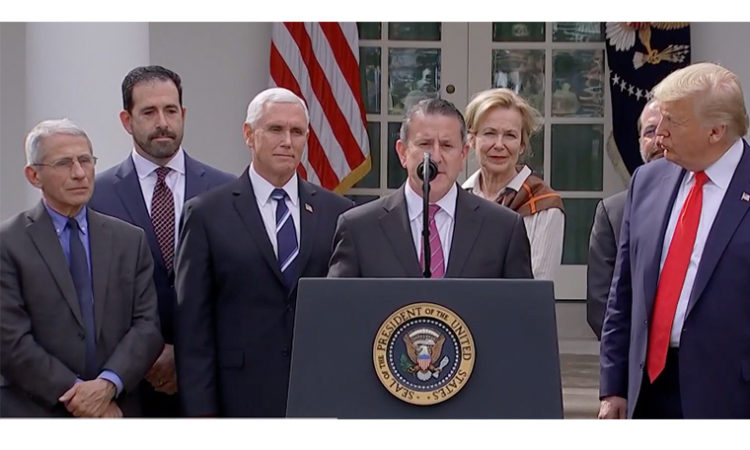 The executive order recommends postponing or canceling events with more than 250 people. The announcement followed the confirmation of five additional cases in the state, bringing the total number of coronavirus infections to 14.

The declaration frees up federal funding for Minnesota’s response to the coronavirus.

“We’re opening the toolbox, not taking a tool out of it today,” Walz told reporters on Friday afternoon. “We need Minnesotans’ help on this. … This is a serious pandemic. While some people may feel invincible and strong, our neighbors are not.”

Flanked by Minnesota health commissioner Jan Malcolm and attorney general Keith Ellison, the governor said he plans to create a “COVID emergency fund” to expand the use of paid sick time.

All the infected individuals in Minnesota appeared to have picked up the virus through international travel, Malcolm said.

“While we do not have evidence of community transmission, it’s important to take action now,” she said.

Though nearly every university in the state has switched to online instruction, Malcolm said there are no immediate plans to shut down K-12 schools. That’s because health officials don’t believe the virus poses a serious health threat to children and teens, she noted.

School closures could happen in the future, though, depending on how the spread of the virus plays out. It’s estimated that about 35 percent of the nursing staff in Minnesota have school-aged children, which may cause a major childcare concern.

Meanwhile, Trump on Friday also declared a national emergency, bringing in top execs from the country’s major retailers. Standing alongside leaders from Walgreens and Walmart, Target CEO Brian Cornell said he remains “committed to keeping our stores open to serve the American consumer, who’s rapidly stocking up on household essentials, key food and beverage items that they need during this time.”

“Normally we’re competitors, but today we’re focused on a common competitor and that’s defeating the spread of coronavirus,” he said.

Cornell added that Target is “making sure we run safe stores and create an environment that’s safe for our team members, making sure they feel supported during this very critical time.”

The national emergency has opened up $50 billion for state and local funding to help address the spread of the virus.

“This will pass through. And we’re going to be even stronger for it. We’ve learned a lot,” Trump said.

Stocks appeared to respond favorably to Trump’s declaration. By the time markets closed on Friday, the S&P 500, Dow Jones Industrial Average, and Nasdaq all grew more than 9 percent.

Still, the long-term economic impact remains to be seen. Andrew Redleaf, founder of the Minneapolis-based financial planning organization Whitebox Advisors LLC, argues that the virus has already caused a recession.

“It’s my view that with the virus we’re almost certainly in a recession. We’ll have two quarters of negative growth,” he said. “It may be pretty sharp in terms of the decline in GDP.”

But it’s unlikely the recession would trigger a financial crisis, he added.

“I don’t see a cycle of forced liquidation,” Redleaf said. “That means the recession is apt to be shorter, and somewhat less painful in the financial market.”

The Great Recession of 2007-2008, for instance, was caused by financial crisis, the impact of which took years to recover from, he noted.

“Some could be getting hit pretty hard right now,” he said.

While many Minnesota companies may start to experience cash flow issues as the severity of the situation progresses, Saber said Park Financial is prepared to help ease the impact of the virus on the state’s businesses.

“I think people are just trying to wrap their arms around their contingency planning needs on this end,” Saber said.