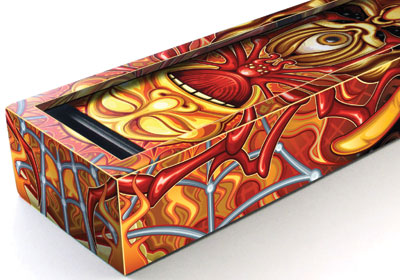 Barry Rubin’s new place of business nicely reflects the nature of his pen retail company. It’s located in downtown Minneapolis in the Rand Tower, whose Art Deco elegance provides an appropriate setting for the high-style fountain and rollerball writing instruments that have long been Rubin’s stockin- trade.

But amidst his computer equipment and his boxes of pens is his diverse collection of vinyl figures—rubbery human-animal mutants that are part toy and part art. And in a sense, those fi gures point to his company’s future direction.

Since 2006, Rubin had operated Ink in a 1,500-square-foot space on the 45th floor of the IDS Center. He sold $300 rollerball and fountain pens to what he calls “everyday writers” and four and five-figure writing instruments to collectors. (Many of those collectors don’t use them to write with. To them, “that would be like playing catch with a baseball signed by Babe Ruth,” Rubin says.)

But as the recession descended, Rubin saw that the writing on the wall. “In 2006, I had companies buying incredible gifts for management, their board of directors, you name it,” he recalls. “They were giving out $500 to $1,000 pens.” But 2008 “was the end of that business.” In the past year, the high end of the market has returned. “But the everyday writers,” Rubin notes, “have never come back.” What’s more, he found that he was selling far fewer pens out of his IDS store and more over the Internet. It was time to move on to the next page (and to his current 500-square-foot space). It was also time to figure out the next generation of customers. “Rolexes and Mont Blancs don’t mean anything to them,” Rubin observes. “Those are their fathers’ brands.” He makes another point: “This generation won’t be collecting Picassos. Their taste is more for ‘lowbrow’ art.” Like Japanese vinyl figures, for instance. That got Rubin thinking: “Why don’t I get hipster artists to design limited-edition pens?”

The first of Rubin’s limited edition Ink Artists Series of pens came out in October. It was designed by Mike Willmott, who worked for Mattel before starting a Oregon design firm called Tweeqim. Willmott also is the art director for the line, and is picking the artists and designs for the upcoming editions. He and Rubin are splitting the profits from each Willmott pen 50-50. An Asian manufacturer is producing the pens.

Unlike, say, the collectible David Oscarson designs that Rubin sells, which are more likely to go for $3,000 to $5,000 (and up), the Ink Artists Series pens will sell for around $295. Rubin hopes to have two more pens, designed by artists Lou Patrou and Chris Lundy, available this year. Profits will be split equally between Rubin, Willmott, and each artist.

Rubin says that the Ink Artists Series Facebook page got 12,000 views the first week it was up, in March. He has marketed the series primarily on line, as well as through his mailing lists. As of early October, 100 pens in the Ink Artists Series had already been spoken for, Rubin says. Only 500 of each edition will be produced. Rubin hopes to introduce a new pen in the series every four months.

It turns out that even Millennials have an eye for the collectible. Several customers have already asked for specific numbers in each new offering. (Some want number 1 or 500; others pick lucky numbers or the last two digits in the years their children were born.)

Rubin downplays the stereotype of young technosexuals whose handwriting (and pen usage) has atrophied from texting and thumb typing. There are still restaurant bills requiring signing and thank-you notes needing the touch of hand-driven ink. Even today, he says. “Everybody writes.”