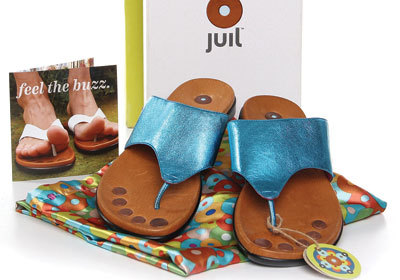 This summer, Minneapolis design and branding shop Ideas That Kick (Hartung- Kemp until July) offi cially added shoe retailer to its capabilities. And why not? The agency not only created the branding and packaging—it helped design the shoes. Kick is part of the investment group behind Juil, the Wisconsin company that sells the eponymous sandal brand. Though Juil is a start-up, its founders had long experience in the shoe business. That was one reason Kick said yes to getting some of its compensation as a return on fi nancial investment. And as Kick principal and brand strategy director Mary Kemp notes, “We are invested in the product design.”

Juil’s designs were originally inspired by former Romanian and U.S. ballet dancer Juliu Horvath, who developed an exercise regimen called Gyrotonics. Ten years ago, Horvath asked a Wisconsin friend to help develop a new kind of shoe. Kick got its feet in the door a couple of years ago, when a Wisconsin shoe producer the agency had worked with asked the Minneapolis shop to help with branding. (Kick executive creative director Stefan Hartung also is Juil’s design director.)

The chief design difference in Juils are the copper “connector disks” in the toes and heels, which are intended to conduct the earth’s “natural, rejuvenating energies” into the body. Kemp says that Juils can be worn as an “everyday casual shoe” by spirit/body health–conscious folks, particularly those who haunt yoga, Pilates, and Gyrotonics studios. (There, and on line, are where the shoes are being retailed.)

Though its footwear is produced in Asia, Juil runs its own warehousing and fulfi llment operation, located in Wisconsin. Kemp says that Juils are selling “ahead of projections.” Juil and Kick are developing new styles for 2012.