Magnetic Productions’ search for the not-too-proud and the brave.
September 01, 2011 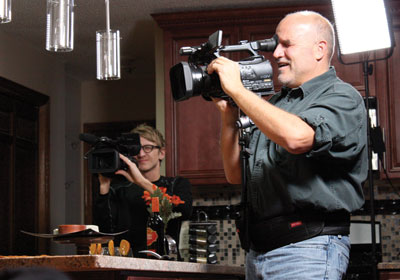 One ingredient that makes Magnetic Productions’ home improvement shows click with viewers: “We need a genuinely ugly space,” says John Kitchener, cofounder and president of the Minneapolis company. “We get photos from people whose spaces aren’t ugly enough.”

Add to that elements of reality television: “Someone sticks a screwdriver into an electrical outlet, sparks fl y, they yell—we don’t shy away from those moments.”

Mostly, though, what Kitchener seeks is homeowners, about 100 Twin Cities homeowners a year, 25 for each of the four do-it-yourself shows that his company produces locally: Sweat Equity, I Hate My Bath, I Hate My Kitchen, and Rehab Addict, all on television’s DIY Network.

The homeowners must have ugly space, yes, but there are other criteria. They must have $5,000 to $10,000 to spend on a home makeover. (Magnetic kicks in $4,000, a designer, and products from the manufacturers that are featured on the shows.) They must be available to be on camera for at least five half-days of videotaping. They must be handy enough to do some of the remodeling work themselves. And they must be fun, energetic, and open to “out-of-box” design ideas, Kitchener says.

Out of the box? “We want people who will say, ‘I didn’t realize you could use translucent acrylic panels that have grass embedded in them for kitchen cabinets.’” His ideal homeowners, Kitchener says, are a young couple who just bought their first house, it needs work, and they want to make the space their own.

There’s one more ingredient in the formula for DIY TV: “Remodeling in general is a very stressful endeavor for couples,” Kitchener says. “It’s murder on relationships. I think part of the fun, honestly, of all these shows on HGTV and DIY is seeing couples in a moment of weakness.”