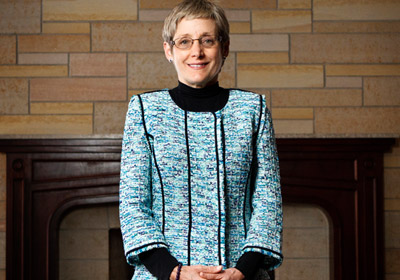 The University of St. Thomas board of trustees elected Julie Sullivan as the successor to Dennis Dease, who will retire June 30 after 22 years as president of the university.
February 24, 2013

The University of St. Thomas on Thursday announced that it has selected its first woman president in the school’s 128-year history.

The St. Thomas board of trustees elected Julie Sullivan to succeed Dennis Dease, who will retire June 30 after 22 years as president of the university. Following his retirement, Dease will become president-emeritus and will work with Sullivan and the board on special projects.

Sullivan is currently executive vice president and provost of the University of San Diego, which is also a private Catholic school. She has occupied that role since 2005.

In addition to being the first woman to take the helm at St. Thomas, Sullivan is the first non-clergy member to lead the school. St. Thomas said it changed its bylaws two years ago to allow non-clergy to serve as president “in order to expand the pool of eligible candidates and hire the strongest person for the position.”

John Morrison, a trustee who served as chair of the search committee, said Sullivan’s background as a professor and administrator makes her “tailor-made for the position.”

“St. Thomas is an outstanding university which enjoys a wonderful history and legacy that is firmly rooted in its commitment to Catholic values and the liberal arts while looking forward with an entrepreneurial spirit,” Sullivan said in a statement. “It is poised to do even more—to expand its influence and its visibility.”

Sullivan said that she recognizes the same challenges at St. Thomas that San Diego and other private colleges are facing—namely, a need to make education more accessible and more affordable.

“Our kind of education is never going to be cheap—not at the quality we want to deliver,” Sullivan said. “We always will need to make our education as affordable as possible while increasing access. We will need to diversify our revenue streams while being conscious of our mission.”

The University of St. Thomas, which has campuses in St. Paul, Minneapolis, Owatonna, and Rome, is Minnesota’s seventh-largest university based on students enrolled in fall 2011, of whom there were 10,534.

The University of San Diego, where Sullivan is currently responsible for all educational programs and support services, is slightly smaller than St. Thomas; its fall 2011 enrollment totaled 8,317, according to the school’s website.