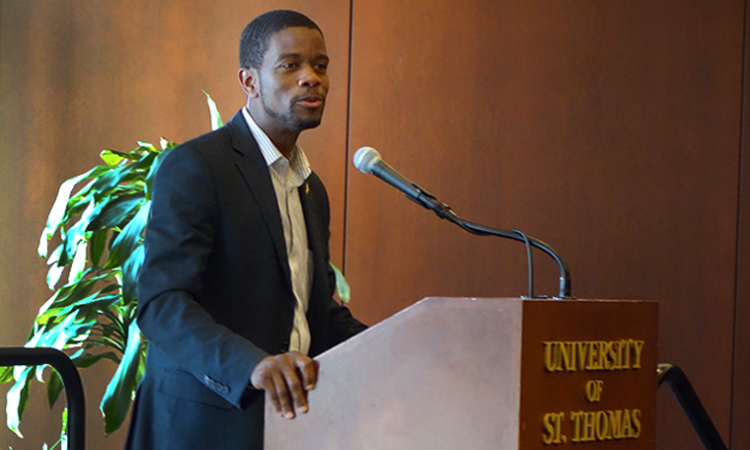 Mayor Melvin Carter: âWe are going to raise the minimum wage to $15 an hour.â ( Photo by Peter Callaghan/MinnPost)

St. Paul’s Proposed $15 Minimum Wage Ordinance Will Give Businesses Up to 9 Years to Comply

The ordinance must still be approved by the City Council, but establishes a plan for phasing in wage increases from 2020 through 2027, with deadlines dependent on company sizes.
By Amanda Ostuni
October 09, 2018

After significant development and discussions, the city of St. Paul has created a $15 minimum wage ordinance to be considered for adoption by its City Council next week. The ordinance takes a page out of the Minneapolis $15 minimum plan that’ll give companies, dependent on staff size, a set amount of time to meet the new requirement.

“This is an exciting moment for our city, and a critical step toward greater prosperity for all St. Paul workers,” said St. Paul councilmember Mitra Nelson in prepared remarks. “I am proud to see a strong ordinance that incorporates the vision and recommendations of our community. I’m eager [to achieve] one fair wage for the city of Saint Paul.”

The proposed wage increase plan is the result of a collaboration spearheaded by St. Paul mayor Melvin Carter, councilmember Chris Tolbert, and a 21-member task force dubbed the Citizen’s League.

Similar to Minneapolis’ already-launched minimum wage plan, the St. Paul plan establishes three business size categories that are based on numbers of employees. Each category has been assigned different deadlines for incremental wage increases to reach $15. Across the board, the minimum wage will also be indexed to inflation from 2028 and on.

The plan does also mention special situations that require adjustments, including youth workers from age 14 to 17, employees participating on a company team in an independent baseball league, employees covered by a collective bargaining agreement, and more.

The St. Paul proposal comes amid a nationwide movement to increase the minimum wage as the cost-of-living has increased throughout the country. Locally, St. Paul councilmember Dai Thao noted in a statement that increasing the minimum wage in St. Paul could help close the city’s existing poverty gap. However, he believes that work won’t end with this ordinance.

“Equally important, the City needs to provide our immigrant and small businesses with equitable support so they can successfully pay $15 an hour,” said Thao.

The next step, a City Council review, is slated for October 17.

“This ordinance will provide a much needed raise to over 56,000 Saint Paul workers,” said mayor Melvin Carter in a statement. “I appreciate Councilmember Tolbert’s leadership on this effort, and look forward to working with the entire City Council to pass it into law before the end of this year.”