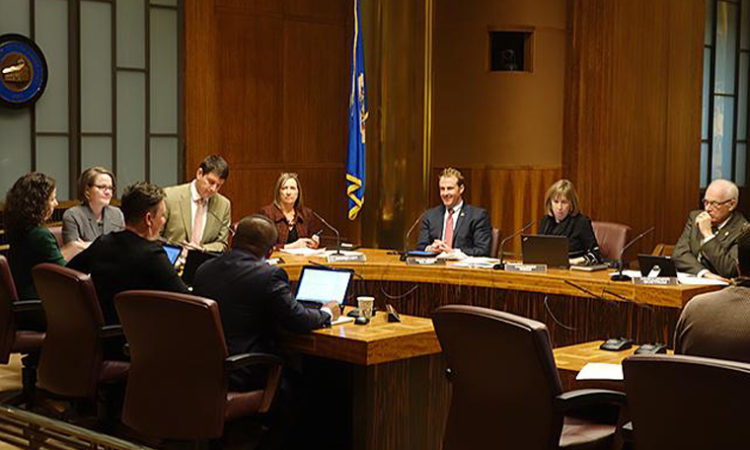 The St. Paul city council Wednesday adopted the 2018 city budget, reducing the problematic right of way assessment and balancing it with a sizable increase in the levy. ( Photo by Peter Callaghan)

The budget is the second since the state Supreme Court tossed out a key source of revenue for the city — and the first to deal with the full brunt of that ruling.
By Peter Callaghan
December 14, 2017

With little comment and zero drama, the St. Paul City Council Wednesday adopted the 2018 city budget and set the 2018 property tax levy. The vote was unanimous. The process took about eight minutes.

Not that there wasn’t drama. The $563 million budget is the second since the state Supreme Court tossed out a key source of city revenue — and the first to feel the full brunt of that ruling. In a rejiggering of city revenue flows, this budget reduces the problematic right-of-way assessment and balances it with a sizable increase in the levy.

How sizable? Well, ahem, 23.93 percent. But as city officials — including Mayor Chris Coleman and council members — are quick (very quick) to explain, for many property owners the reduction in the right-of-way assessment will compensate for the levy hike.

For example, the median St. Paul home valued at $173,900 would have paid $791 in combined property tax and right-of-way assessment in 2017. That same house will see a 7.7 percent increase in assessed value and will pay $826 next year, an increase of 4 percent.

“Overall, even though the levy increase this year is significant — in large part because of the shift in the right-of-way program — I think this is a pretty modest budget,” said Council President Russ Stark. “It is basically meant to maintain current service levels and add a couple of key things.”

Said Council Member Rebecca Noecker: “I know for a lot of my constituents this was a significant increase this year, especially for those who saw significant increases in their property values.” But she said she also thought the budget “showed great restraint.”

And while Council Member Jane Prince feared that some residents in the highest-poverty neighborhoods might face higher taxes, partly because housing prices in those areas are seeing higher-than-average increases, she said the council succeeded in being prudent.

This was Coleman’s 12th and final budget. He is stepping down after this year, to be replaced in January by Mayor-elect Melvin Carter. And if there is to be political pushback for the tax hike, he’ll be the first to feel it. He is running for governor next year while the council members don’t return to the ballot until 2020.

“Each of the last 12 years, my administration has put forth a values driven and fiscally disciplined budget,” Coleman said in a statement.  “Leadership often means having to make difficult decisions about how to invest public dollars. This budget was no different. I am pleased that the City Council has adopted my ninth consecutive structurally balanced budget and I remain confident that Saint Paul will continue to move forward on the sound financial footing that we have fought to create.”

As is common, most of the final budget corresponds to what Coleman proposed in August. In a budget of hundreds of millions, the amendments proposed by council were measured in the tens and hundreds of thousand dollars. After adoption, Coleman highlighted continued funding for the Right Track program, which provides young people with summer jobs and internships. The budget adds six new police positions, increasing the number of sworn officers to 626. It also implements the body camera plan and creates a mental health crisis unit within the department.

In economic development, the budget puts $750,000 into a Commercial Vitality Zone program for neighborhood commercial areas and a $500,000 Job Opportunity Fund to help small business owners in struggling neighborhoods. It also creates something called Full Stack St. Paul to market the city to innovation and technology jobs, with a three-year goal to add 2,000 tech jobs and 200,000 square feet of tech businesses.

And the battle against emerald ash borer will get a $2.6 million boost.

St. Paul’s budgeting was complicated by a state Supreme Court ruling in August 2016 that said the city couldn’t continue to collect its right-of-way assessment as it had for years. Last December, the council and mayor cobbled together a temporary fix with higher-than-anticipated property tax levy increases and a list of services and programs that were left unfunded until a permanent fix could be found.

That fix became a much smaller and less lucrative right-of-way assessment — now called the street maintenance service program — and a much higher property tax levy hike. That’s because some services that had been paid for with ROW dollars are now going to be paid through the city general fund. The city finance staff estimates that 19 percent of the 23.9 percent levy increase is due to the shifting of services to the general fund.

Coleman and the council say that the total dollar amounts collected from taxpayers will be roughly the same. That is, increases in residents’ property tax bills will be offset by a decrease in what has been paid for right-of-way/street maintenance. In fact, the 2017 budget and the 2018 budget spend almost the same amounts: $563 million.

But there will be winners and losers. The owners of a high-value property may well pay more in property taxes than they will save in reduced street fees. And nonprofits who own property — churches, universities, hospitals — will pay significantly less because they pay no regular property taxes and will see their street fees go down with everyone else. The successful challenge was brought by a pair of downtown churches that argued that the ROW assessment felt a lot like a property tax in the breadth of the services it paid for.

But homeowners in lower-priced-but-appreciating neighborhoods that Prince mentioned will likely see a bigger ROW reduction than the increase in property taxes. Moreover, the property tax is less regressive than the ROW, since in that the property tax is based on property value while the ROW assessment was based on street front footage. All of which meant that the owner of a $200,000 house paid the same as the owner of a $1 million house if both had 100 feet of street front.

Given that nonprofits are seeing the most significant savings, the council asked for a study by the Citizens League to craft a program of voluntary contributions by tax-exempt properties: Payment In Lieu of Taxes or PILOT.

The council has also discussed jettisoning the whole system of separate fees for street services and rolling it all into the property tax. But that is a discussion yet to come.