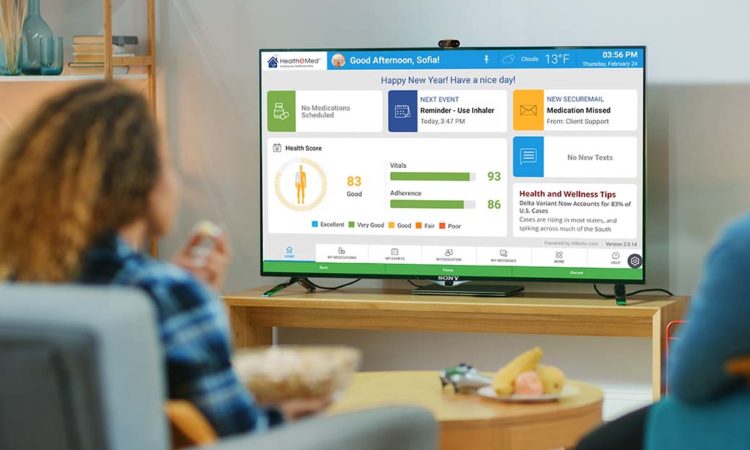 For some patients, one element of the Clinic@Home system includes a 50-inch Sony smart TV along with numerous remote patient monitoring devices. HealthEMed

St. Louis Park tech company HealtheMed is looking to redefine at-home care systems with a new service known as Clinic@Home. Formally launched in September 2020, the digital at-home system is specifically tailored to Medicaid-waivered patients, a population of Medicaid individuals with disabilities or chronic illness who may not ordinarily have access to preventative health care.

Tom Spencer, CEO of HealtheMed, says it’s a population that may not always have easy access to a doctor’s office.

For some users, one element of the Clinic@Home is a 50-inch Sony smart TV. The system can also include numerous remote patient monitoring devices such as thermometers, blood pressure monitors, a medicine dispenser, and a pulse oximeter. The equipment installation is said to take about 45 minutes, including extensive training. These technologies allow doctors to visit patients in the comfort of their own homes without having to leave the office. The company installed its first Clinic@Home system in early 2021.

The system is partially aimed at cutting down on costly ER trips or hospital stays for vulnerable individuals.

“It reduces the total cost of care for this population that has historically represented a significant portion of the state’s annual Medicaid spend,” Spencer said.

According to federal statistics, Minnesota’s Medicaid budget surpassed $12 billion in the 2019 fiscal year. HealtheMed estimates that the state spends about six times more on the 80,000 waivered patients than non-waivered individuals. Funded by the Minnesota Department of Health Services, Clinic@Home is aimed at driving some of those costs down for this particular population segment.

“This is our most vulnerable population,” Spencer said. “They typically have limited access to transportation to go see a doctor; they may have anxiety about being in public places or may have had previous bad experiences with a health care provider. As a result, they don’t get the preventative care they need, and therefore they become the costliest citizens for the state to serve.”

Clinic@Home is a hybrid service. Patients can visit their doctors through the telehealth system, but they’ll also receive in-person visits from a consulting nurse during these health and wellness telemedicine appointments. Spencer said that having a nurse on-hand during the visit is essential in building a relationship with the patient.

Spencer noted a growing divide between doctors and patients within recent years. “Patients are more distrusting than they’ve ever been,” he said. “It’s essential to build that trust. To really reassure these individuals that in all likelihood they are going to see the same provider stick with them.”

In the meantime, HealtheMed is raising capital to help it expand. On Friday, the company announced that it raised $1.2 million in a funding round led by Atlanta-based Panoramic Ventures. HEP Fund co-founder and partner emeritus Bob Schulz and Chicago-based OCA Ventures also participated. Including angel funding, HealtheMed has raised a total of $2 million to date.

“We’re pleased to welcome the HealtheMed team into our growing portfolio of healthcare companies that are making a real difference while also helping to bend the cost curve in healthcare,” said Austin Poole, principal at Panoramic Ventures.

Home health care likely will play a greater role for patients of all stripes in the future. Some industry giants already appear to be preparing for it. Minnetonka-based health insurance giant UnitedHealth Group this week said it plans to spend $5.4 billion to acquire an in-home health provider. Fellow industry health industry titan Anthem acquired its own home health company about a year ago.

“All we’re doing with HealtheMed is using technology to build a bridge back to the home,” he added. “Health care is coming home again.”