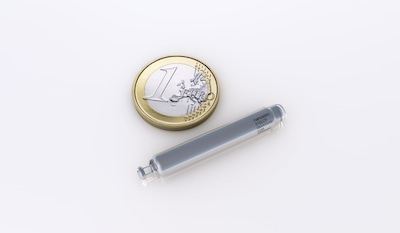 The St. Paul-based medical device company recently acquired a developer of miniaturized, “leadless” pacemakers, which will strengthen its position in the multibillion-dollar global pacemaker market, the company said.
October 24, 2013

“Nanostim adds the world’s first and only ‘leadless’ pacemaker to the St. Jude Medical product portfolio,” company spokeswoman Kate Stoltenberg told Twin Cities Business. She added that the acquisition builds on the company’s “strong history of pacing innovation that began with the first implantable pacemaker in 1958 and now includes the introduction of quadripolar CRT pacing,” which provides additional pacing configurations.

The Nanostim “leadless” pacemaker is less than 10 percent the size of a conventional pacemaker and is implanted directly into the heart through a minimally invasive surgical procedure, St. Jude said. The procedure eliminates the need for insulated wires, called “leads,” which run through the veins and connect to the heart. The wireless pacemaker also eliminates the need to surgically create a “pocket” to hold the pacemaker.

The pacemaker recently received conditional FDA approval for clinical study use, and the company expects trials to start in the first half of 2014. Stoltenberg said it is still too early to speculate on when the device will be commercially available in the United States.

St. Jude and Nanostim had discussed merger plans since 2011. In addition to the $123.5 million paid to Nanostim shareholders, St. Jude agreed to another $65 million in cash payments, contingent upon both the achievement and timing of certain revenue-based milestones.

Stoltenberg said that all 45 of Nanostim’s employees will become part of St. Jude’s implantable electronic systems division. The company will continue to operate out of its current California facility until St. Jude Medical transitions manufacturing to its own facilities during the next couple of years.

“We look forward to welcoming Nanostim employees to St. Jude Medical and to continuing our legacy of transforming the treatment of cardiac rhythm disorders with pioneering technology,” Eric Fain, president of St. Jude’s implantable electronic systems division, said in a statement.

St. Jude also recently acquired Geneva, Switzerland-based medical technology company Endosense for approximately $331 million. Endosense produces a catheter that informs doctors whether the correct amount of force is being applied to the heart wall during procedures to treat irregular heartbeats.

Twin Cities Business investigated the innovative and competitive nature of the pacemaker market in Minnesota. Click here for the full story.

Approximately 2,500 of St. Jude Medical’s 16,000 employees work in Minnesota. The company’s revenue totaled $5.5 billion for the fiscal year that ended December 29, making it one of Minnesota’s 15 largest public companies.