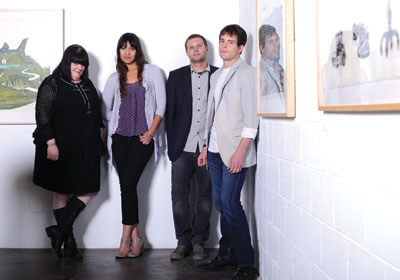 Permanent Art and Design Group is developing a creative agency model by tapping the talents of local artists.
November 01, 2011

Marketing agencies often bring in outside designers and other talent for specific projects. Minneapolis start-up Permanent Art and Design Group is taking a more artistic approach to marketing and branding collaboration. “Permanent developed out of all of us coming from different industries and backgrounds that have changed,” says Permanent cofounder Joseph Belk. Having worked in the graphic design business, he’d seen how big agencies had trimmed back. He’d also seen that clients were developing a greater interest in strong design, and how an aesthetic sensibility could reinforce their brands.

Belk, whose background also includes art gallery owner, and cofounder Mike Bishop, whose rÃ©sumÃ© includes gallery curation and a Carlson School of Management MBA, have assembled a collaborative design group comprising some of the photographers, film and video artists, and designers they’ve worked with in their exhibitions and elsewhere. The model: incorporate the ideas of artists (who work freelance) into a client’s branding.

Permanent owns and operates two Minneapolis galleries. One is CO Exhibitions in Northeast, which features large-scale exhibits and installations that bring graphic designers into the art realm. The other, XYandZ in Longfellow, focuses on emerging and mid-career artists. Most of the shows at both spaces also incorporate multimedia elements such as film, sound, and technology.

One of Permanent’s first projects was for furniture maker Herman Miller. With Intereum, a Plymouth-based Herman Miller vendor, as a client, the fledgling firm oversaw the production of a music video for a February event introducing the local market to Herman Miller’s new Sayl chair. Permanent called in nationally known, locally based Isaac Gale to film a video of the event, in which dancers with local troupe Ballet of the Dolls interacted with Sayl chairs on the stage of the Ritz Theater in Northeast Minneapolis.

Permanent does perform more “traditional” branding and Web site design work, with Minneapolis clients including nationally known commercial designer Michael Cina (a Permanent group member) and Fabulous Catering. But a distinctive aspect of the Permanent model is the “self-initiated” project, where Permanent and design group members develop an idea, then take it to potential clients and sponsors.

This summer, Permanent set up such a project, which it calls Synthesis, for commercial furnishings dealer Fluid Interiors. The video and photography installation features the work of photographer Eric Melzer, who took pictures of scenes within three miles of Fluid’s Warehouse District headquarters and showroom. Though the images don’t show any of Fluid’s wares, Berk Claiborne, president of Fluid Interiors, says the installation “rounds out what we’re about,” reinforcing its brand to its architecture and design clientele as local and aesthetically au courant.

In October, Permanent landed its second Synthesis client: Cummins Power Generation, which will incorporate a Permanent-curated photography and video installation next spring into its new headquarters in Shoreview.

Another recent project that also helps illustrate the Permanent model is the agency’s production of the annual Boys and Girls Clubs of the Twin Cities gala in October. The project included event design, branding, Web design, interactive presentations, and visual art installations using Target Field’s Jumbotrons. Next year, Permanent (which has become the Clubs’ design agency) will develop the organization’s onsite arts programming.

Belk says that Permanent seeks to give its artists and designers free rein over their ideas and put them to work in a branding and marketing context: “Being able to work with artists who want to take on more and want to create a bigger idea, that’s something we apply structure to and embrace, and we’ve solidified the idea in a more professional model.” —Gene Rebeck