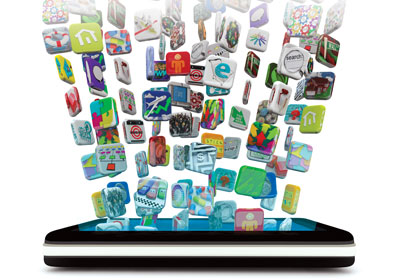 Measuring soil density? Checking patient records? Delivering data to the board of directors? There’s an app for that.
September 01, 2011

A surprised client at a construction site once called Braun Intertec, the Minneapolis testing and engineering firm, to make sure there wasn’t a problem. The results of Braun’s just-completed soil tests had already shown up in the caller’s e-mail inbox, but Braun’s field technician hadn’t even left the site yet. In fact, he was sitting out in his truck, apparently playing on his BlackBerry.

The technician, it turned out, was using a mobile application to upload fresh soil density measurements to a database, from which a project engineer was able to review them for quality control, generate a final report, and e-mail it to the client, all with a few keystrokes.

The field technician app, which has since been adapted for use on iPads, iPhones, and Android devices, is just one example of how companies are streamlining and accelerating the way they do business by putting mobile apps in the hands of employees.

Mobile apps are becoming an indispensable part of the daily routine for more and more professionals, from truck drivers and salespeople to surgeons and CEOs. It’s a trend that’s accelerating as more employers realize that device and development costs are often easily offset by gains in efficiency and productivity, and in some cases, new revenue generation.
In March, Braun Intertec spun off a new company, Agile Frameworks, specifically to market its MetaField mobile app to other engineering and construction firms. Mike Anders, president of the new subsidiary, says it’s an area where they se “great commercial opportunity.”

Braun has used a version of the app internally since 2004, making it one of the earliest adopters of employee-facing mobile apps. More companies are following that example, often with a nudge from employees who use mobile apps in their personal lives and want the same convenience on the job.

An Employee-Driven Trend
The first generation of smartphone apps were mostly aimed at consumers. Apple opened its App Store in July 2008, and it wasn’t long before there was an app for just about everything, from ordering pizza to reporting accidents to your insurer. Target, Best Buy, and other retailers released apps that let customers scan barcodes to pull up additional product information on their phones.

Suddenly, customers had more information and better technology at their fingertips than employees did in many cases. This created a challenge and helped seed the demand for employee-facing apps, according to Nathan Clevenger, chief software architect with ITR Group in Mendota Heights.

“How would you feel if a customer came up to you to ask a question but already had more detailed information about the product on his or her phone than you had access to on the rugged handheld scanner provided to employees by the store?” writes Clevenger in his book iPad in the Enterprise, a guidebook released this year that traces the history of how mobile apps infiltrated the workplace.

Meanwhile, workers of all stripes, not just in retail, were beginning to use apps in their personal lives and getting frustrated that they were still tethered to a computer at work. The popularity of customer-facing apps raised the expectations for workplace mobile technology, Clevenger says.

At which point you had people like Dr. Brad Leibovich starting to speak up. One day in 2009, the Mayo Clinic urologic oncologist found himself running back and forth to computer stations to check his patients’ electronic medical records using the clinic’s Synthesis software. He noticed a phone number on the screen to call for help or feedback. “I called and said, ‘Why can’t you put this thing on my iPhone?’” Leibovich recalls.

The clinic’s IT department had been looking for a physician who could help champion the concept. Within a couple months of Leibovich’s call, IT had developed a beta version of SynthesisMobile, which lets Mayo physicians dictate notes and review patient medical records from an iPad, iPhone, or iPod Touch. Leibovich estimates that the app has help trim about 30 minutes from the time it takes to do his daily patient rounds.

More Than E-mail, Calendar
Mayo’s SynthesisMobile app has since been installed on more than 3,500 devices and is used daily by hundreds of Mayo physicians.
The use of mobile apps is taking off at other workplaces as well. In a September 2010 survey by developer Pyxis Mobile, 42 percent of respondents said their company had already deployed an employee-facing mobile app. Technology, consumer goods, and financial service companies were the most common adopters, according to the survey.
The specific functions of enterprise mobile apps vary dramatically, from keeping track of rental equipment to keeping directors apprised of board meeting documents. Among the apps that are under development or already deployed at Twin Cities companies:
•   Target’s MyStores app, which lets district leaders view key metrics such as sales, payroll, and guest survey results for the 8–12 stores they each oversee. The retailer rolled out the app in December. Previously, district leaders had to print and carry several paper reports to prepare for store visits.
•   Citi-Cargo & Storage in Eagan is developing an app that will eliminate paperwork associated with picking up and dropping off rented semi-trailers and storage containers from its yards. The app, for the iPhone and Android platforms, will pull in date, time, and location data when workers scan a barcode on the trailer or container. Any damage can be reported with the phone’s camera.
•   Thomson Reuters’ Boardlink app lets board members view meeting packets on their iPads, rather than having to download and print documents beforehand. It’s eliminating the hassle factor of getting everyone on the same page, and it’s saving reams of paper. The company uses it internally, and also offers it to customers.

Saving Time, Reducing Paper
While employees have helped generate interest in enterprise mobile apps, employers are buying in because they see opportunities to both reduce costs and increase revenue. An August 2010 survey of enterprise mobile decision makers by Frost & Sullivan found that 42 percent cited increased productivity as their reason for pursuing employee-facing apps; 39 percent said reduced paperwork was a motivation; and 37 said revenue generation was a factor.

The benefits have been all of the above for Braun Intertec, which has been able to significantly streamline its operations and eliminate much of the “re-work” that was previously involved when employees had to type up handwritten notes from the field.
“We were able to move [those employees] into higher-value client service roles,” Hase says. “It’s a much more rewarding job, and it also provides much better customer service for us.”

Medtronic, which has developed dozens of employee-facing apps and has its own internal app store, is using mobile apps for the iPad to help its salespeople become faster on their feet with presentations to customers.
“At least 25 of our applications are focused on presenting material more easily, more effectively, and with a little more flash, frankly, to the end customer,” says Jeff Bipes, Medtronic’s enterprise mobility IT manager.
In the past, salespeople would have to carry around paper brochures and a laptop if they wanted to show off one of the company’s medical devices. Boot-up time and finding the right fliers made impromptu presentations challenging. Not so with the “lighter, faster, easier,” always-on iPad.

Seppy Yoon, marketing director for Magenic Technologies, a custom app developer in Golden Valley, jokes about mobile apps leading to the rise of “cyborg salespeople.” Companies are using apps to better integrate sales and marketing intelligence, empowering salespeople with information about all of their target’s previous contacts with the company and allowing them to tailor their pitches more precisely.

Another potential benefit: happy employees. Workers often get a cool piece of technology out of the deal, and it typically frees them from some paperwork, or “the burden of clerical activities,” as Dr. Leibovich calls it.

Designing for Users
That is if the app is done right.
The biggest challenge to developing employee-facing mobile apps isn’t the coding or even the cost. It’s making sure the app is designed in a way that fits employees’ workflow.

“The people part is the hardest,” says Link Swanson, network administrator and Web developer for Citi-Cargo & Storage. In the spare time between his day-to-day duties, he’s been building the app that will soon mobilize the check-out and drop-off process for the company’s semi-trailers and storage containers. It’s critical to spend time observing and talking with the people who will be using the app. Otherwise, even the best programmed app will be a loss.

“Even worse than a loss—you’ll get people angry at you for pushing this thing on them that is a new hassle,” Swanson says.
The cost of building a custom mobile app can vary significantly depending on the level of complexity and whether it’s developed in house or hired out. When it comes to employee-facing apps, custom development is the most common route, although the use of off-the-shelf products is increasing, according to a 2010 Forrester Research report. The challenge, however, is that most companies have very specific situations in which they’re looking to incorporate a mobile application. Most enterprise software publishers are also offering or developing mobile apps to complement their desktop programs.

Another thing to keep in mind: there’s a lot more to enterprise mobile apps than the code that goes onto the phone or device. Most enterprise apps are actually just interfaces that let users tap into a more advanced information infrastructure at the office or in the cloud. “Enterprise mobile is about really big computers talking to really tiny handheld computers,” Yoon says.

The 2010 IBM Tech Trends Survey predicts mobile development will surpass traditional software development by 2015. Clevenger names hospitality, health care, and medical devices among the industries that have already embraced employee-facing mobile apps, and he predicts that for others, it’s a matter of when, not if: “Mobility has really gone mainstream.”