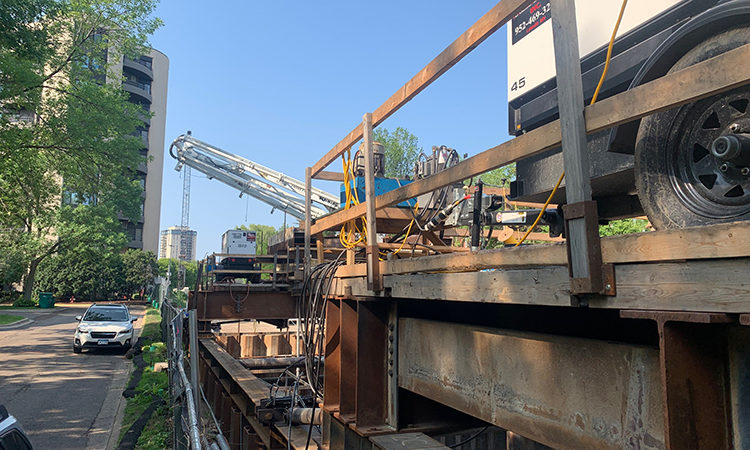 Project delays and cost overruns will be measured in years and hundreds of millions of dollars.
By Adam Platt
July 15, 2021

If you want to understand why Southwest Light Rail is likely delayed several years beyond its last anticipated opening date, make a visit to Park Siding, an obscure park on the extreme western edge of south Minneapolis. There, the sounds of water are everywhere. Water gushing through pipes, water being sucked into other pipes, reminiscent of the sounds in a dentist’s office.

Park Siding Park is named for a railroad siding that once occupied a tiny triangle of land in the shadow of former grain elevators turned into condos. It is hard by miniscule Depot Street, another reminder that the Kenilworth corridor has long been a transitway for trains.

But what’s happening between Park Siding and Depot Street today is construction of a half-mile tunnel that will carry the Metropolitan Council’s Southwest LRT project through a pinch point in its 15-mile path from downtown to Eden Prairie. Complexities with water, underground debris, and construction methods seem poised to push the line’s opening deep into 2025 or 2026.

Ever since word started to leak out last fall that the Kenilworth tunnel construction was stuck in a sloppy mess of water and boulders, contractors and Met Council officials have known the line could not meet its opening estimates, and that tunnel costs could blow through the project’s contingency fund. But the agency insists even today that it cannot estimate the magnitude of delay nor additional cost.

But in midwinter, in a private call with government stakeholders, the Met Council did offer some specificity, TCB has learned. At the time, the project was expected to be delayed by at least two years into late 2025, say individuals on that call, including state Rep. Frank Hornstein (DFL-Minneapolis), who chairs the state House Transportation Committee. Hornstein is a supporter of the project who frames himself as disappointed in its current state.

“We raised questions about all these problem areas. They were waived away. Every dire prediction came true, the ones about cost overruns, the ones about the tunnel, the millions given away to railroads in negotiations,” he said in a spring interview.

Although contaminated soils and a separation wall demanded by adjacent BNSF Railway will add nearly $100 million in overages to the project budget—and take time to respectively remediate and build—it will happen concurrent with tunnel construction, which is the biggest headache.

The Kenilworth Tunnel, long the open wound among neighborhood and environmental activists, has been plagued by what they deem as foreseen challenges—which have forced construction crews to adopt complex and time-consuming fixes to maintain its structural integrity. They include turning to a special method of construction to protect the foundation of the adjacent Calhoun Isles Condos, built in 1928 as grain elevators along the then-Minneapolis & St. Louis Railroad.

Specifically, the sheet piling that forms the walls of the tunnel excavation has decoupled once underground due to the presence of boulders and other debris, requiring it be hand-sealed in a time-consuming process that includes divers working under the water table.

The excavation also comes inches from the condominiums, which sit just to the southwest of Park Siding. Given the sheet decoupling elsewhere in the tunnel, a decision was announced in winter to build a drilled concrete (“secant”) retaining wall at the condos instead, which will add additional months and millions to the timeline.

Nearby Minneapolis lakes neighborhood groups long believed the tunneling endangered the condo foundations and portended many other environmental and construction ills, going so far as to file a federal environmental lawsuit, which failed. They were repeatedly assured by the Met Council that the project as designed would be safe and readily buildable.

“They called us NIMBYs, rich people who just wanted not to be bothered,” says Mary Pattock, former chair of the Cedar Isles Dean neighborhood board and longtime critic of the LRT routing. Echoing Rep. Hornstein, she says, “we told them the geology between the lakes was messy. We told them there was not room to build a tunnel safely. We told them you are going to run into problems you are not going to be able to solve. Now it’s all coming true.”

No one at the project level is offering a mea culpa. “I don’t think she’s raising issues that weren’t contemplated,” says Edina Mayor Jim Hovland, who has sat on the project’s Corridor Management Committee since the 2000s, back when the route was still being settled. “We thought about all that stuff. We still think it’s the best route.”

No line would have been free of lawsuits and strife, but it is hard to imagine how a surface route at grade through the Minneapolis Farmer’s Market to Hennepin Avenue to the Midtown Greenway connection with the existing right of way would have been any more difficult.

Pattock wonders, given the pandemic-driven changes in commuting patterns, and the inevitable toll that will take on transit usage, if it’s even justifiable to complete SWLRT. “What are the limits,” she asks, “to what they are willing to pay for a project so deeply troubled?”

The $2 billion project continues to book change orders and eat away at contingency funds. The primary $203 million contingency fund is basically exhausted, according to public documents. An additional $200 million contingency, demanded by federal transit regulators, remains to be tapped. No one is quite clear if that will be enough to deal with the remaining overruns.

SWLRT began initial brush removal and clearing in late 2018, heavy construction and work on the tunnel began in 2019, says the project office. Completion had initially been planned for late 2022 (with public ridership in 2023). As of this writing, the line is 50 percent built, not substantially off that pace, but the Kenilworth tunnel excavation is only 10 to 20 percent complete. And the secant retaining wall has yet to start. It’s difficult then not to infer that the half-mile tunnel may be a five or six-year effort.

The project also recently booked a $9 million change order for up to three years of storage for purchased components, leading to an indication of the measures of delay anticipated.

The neighborhood’s city councilmember, Lisa Goodman (DFL), who has never supported the Kenilworth routing, is asking for greater transparency. “This is the largest taxpayer funded transit project in our region,” she says. “[Residents] have the right to know how much longer their lives and the neighborhood will be disrupted, what the likely cost overrun is going to be, and when they can expect to see transit service begin.”

A sympathetic voice is Hennepin County Commissioner Debbie Goettel, a civil engineer who represents Bloomington, Richfield, and Eden Prairie, and serves on the line’s Executive Change Control Board (ECCB), which approves each budgetary deviation. She says Hennepin County is pushing back against the Met Council’s penchant for finessing difficult topics, but accepts its rationale that it is impossible to estimate the line’s rough completion date or cost.

Goettel says she is not certain the project can be finished within its remaining contingency dollars, which concerns her because it will be Hennepin County taxpayers making up any overage. There are just too many unresolved factors driving delay and inflating the project’s cost, she says. Goettel is “concerned about transparency. I ask a lot of probing questions.

“Materials are difficult to find right now, and their cost is rising,” she says. Specialists in designing and constructing the tunnel are expensive and hard to schedule. She blames two to three years of initial delay on the Trump Administration, where the project moldered awaiting funding. (Those delays were compounded by the local lawsuit.)

Even other trains are delaying the line. All work needs to stop every time a BNSF freight moves through downtown, which is several times a day, even work on the $93 million, mile-long wall BNSF demanded between its trains and SWLRT’s. Because the wall is much larger than the Met Council anticipated, and will take much longer to build, these delays add up to something quite substantial. Project spokesperson Trevor Roy says he expects wall construction to take almost as long as the tunneling work.

But in the end, Goettel says, stopping remains an absurd prospect, noting that hundreds of millions of dollars of spent federal funds would need to be returned to the U.S. Treasury, not to mention leaving dozens of partially built bridges and other structures scattered across the southwest metro. “It will take years to build transit usage back [from the pandemic],” Goettel admits, “but this will be a very well-utilized line one day.”