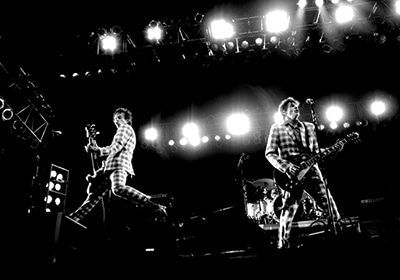 Sorry Ma, Forgot to Take Out the Cash

Is the Replacements’ 2015 reunion tour making up for a career of meager paydays?
November 03, 2014

The brash, unbridled and beloved Replacements were a critically celebrated, flannel-clad Minneapolis band of the 1980s, but they are said to have never made much money before breaking up in 1991. The group, anchored by original members Paul Westerberg and Tommy Stinson, played a series of high-profile gigs this summer that drew bigger crowds and higher prices than anything they pulled off in the 1980s.

The Mats, once a fixture at First Avenue in downtown Minneapolis, may have left a checkered reputation for sloppy live shows, but “I think the band’s legacy has grown over the years,” says Darren Hill, the band’s Rhode Island-based manager. “There are more people wanting to see them today than when they split up 23 years ago.”

How much money is the reunion raking in? Was the Replacements’ September concert at Midway Stadium the most lucrative venture the band ever engaged in? “That’s confidential,” says Hill.

The Midway show drew 14,000 people paying $50 per ticket. In round numbers, that’s $700,000, before deducting paying for opening bands and concert-related production costs.

Longtime concert promoter Randy Levy of Minneapolis-based Rose Presents notes that the reunited band’s nostalgia appeal means it can play larger venues charging higher prices than the original group ever could have drawn.

“I’m sure it’s their biggest payday,” Levy says of the St. Paul show, but adds, “I personally make more money today than I did in 1991. It’s all relative.”

The gig also sold a ton of T-shirts and posters, but the band’s take is unclear. “It’s been doing very well,” Hill says of merchandise sales. “That [St. Paul] show in particular was extraordinary.” Still, “the net is never anywhere near the gross.”

There’s more product in the pipeline, including a likely live DVD. “We’ve been filming and documenting the shows since the comeback,” says Hill. He notes that the band might “quite possibly” do more concerts in 2015 and allows “there will be a new recording of some sort at some point.”

In an interview with Rolling Stone, Westerberg downplayed the paydays and joked that the band was in debt to “the Mob.”