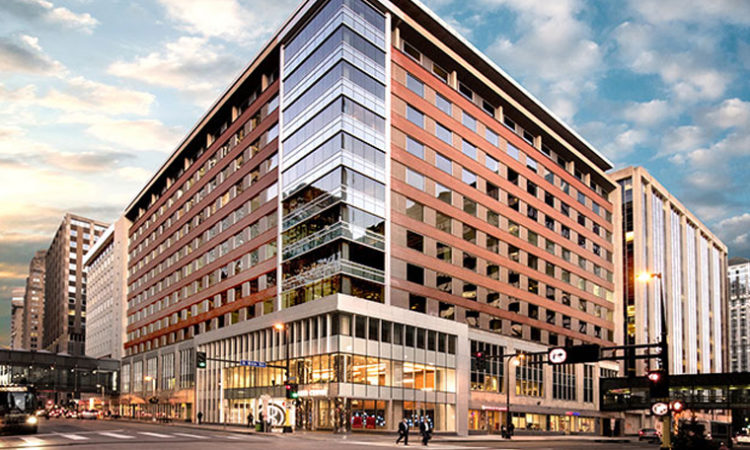 To accommodate growth and better attract talent, the company will consolidate Twin Cities staff into a single, significantly larger space in the Baker Center in downtown Minneapolis.
By Amanda Ostuni
August 13, 2019

Merrill Corp., a software-as-a-service (SAAS) provider for mergers and acquisitions, is pulling up stakes from its St. Paul headquarters of more than 50 years and moving to Minneapolis.

The company will remain in the Twin Cities but consolidate its St. Paul and North Loop operations into the Baker Center building in downtown Minneapolis.

The move brings Merrill’s Twin Cities employees—about 220 in St. Paul and 150 in the North Loop—under one roof for the first time. The company also expects the new digs to accommodate future growth.

The new office takes up the entire 6th floor and most of the fifth floor of two interconnected buildings in the Baker Center, which is located at 733 Marquette Avenue. The new location measures nearly 80,000 square feet, suitable for about 450 employees.

“Following our transformation from a collection of financial printing and communication businesses to a global, cloud-based provider of technology for mergers and acquisitions professionals, we are experiencing rapid growth,” said Merrill Corp. CEO Rusty Wiley in a statement. “The upcoming headquarters move not only helps us better serve our customers, it also gives us access to top talent in the Twin Cities to support our growth strategy.”

The company currently handles more than 9,000 M&A transactions per year, with 25 office locations and 670 employees across 13 countries. In recent years, the company has had a compound annual growth rate of about 14 percent, Merrill CFO Tom Donnelly tells TCB.

In considering a larger space for the future, the decision to move to downtown Minneapolis came partly from employee input. The goal, says Donnelly, was to enhance convenience for employees, both for the sake of retaining current staff, and attracting new talent.

“I think accessibility, safety, and amenities were probably the three drivers that drove the decision for Baker,” says Donnelly.

He notes that multiple park-and-rides let off and pick up on both sides of the building, which is just two blocks from the light-rail line. There are also 3,400 parking stalls within about a two-block radius.

“So, it’s very easy to get to for the kind of workforce that we have—many of whom prefer not to drive,” says Donnelly.

When it comes to amenities, Donnelly notes the building—which was recently renovated by its current owner, Minneapolis real estate firm Transwestern—includes a fitness center, outdoor patio, conference center, and concierge services. He also acknowledges the benefit of the Baker Center’s place in the skyways, which offers convenient dining and errand options plus indoor winter access.

The office itself, which has yet to be developed, will take a cue from the rest of the Baker Center, and from Merrill’s North Loop spaces: It will be designed in a style featuring more collaboration and meeting spaces in an open environment, rather than many offices and cubicles.

“Our assets are our people. And we're going to design an environment to attract and retain the best talent we can find in the Twin Cities,” says Donnelly. “It’ll have that modern feel—that open, collaboration culture. It’s the way we develop product, it’s the way our engineers want to work, and we’re excited about it.”

Donnelly says the company’s St. Paul campus is “very old school,” with the last renovations completed about 10 years ago. In the fall, Merrill sold that campus to Hoyt Properties for $9.95 million, leasing it back afterward to retain as a home until April 2020.

By that time—when both that lease and the lease for the North Loop space is up—Merrill expects the Baker Center office to be ready. Construction is slated to begin right after Labor Day.