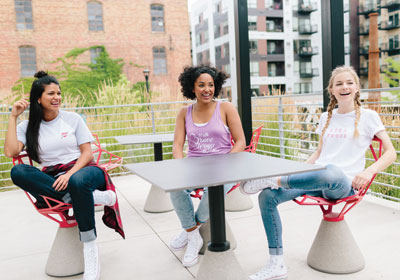 Minnesota ranks highly on a number of lists and measurements, including unemployment figures, best places to live and the general overall health of its residents. But there’s another, darker list that the area is also listed on: It’s one of the top states in the nation for child sex trafficking.

It was that statistic that prompted Mandy Multerer and Wayne Zink to tackle the issue in a unique way. Using Zink’s philanthropic background and Multerer’s design and marketing expertise, the two launched My Sister, a public benefit corporation aimed at ending trafficking by selling apparel and donating a portion of the proceeds to nonprofits.

This Saturday, the company will open its first brick-and-mortar location in Minneapolis’ Uptown neighborhood.

“There are already so many nonprofits fighting sex trafficking,” said Multerer, who serves as CEO of the company. “So instead of starting one, we wanted to use this business structure to fuel funds for those nonprofits.”

My Sister already sells its splashy T-shirts, tanks and long-sleeves—with slogans like “Feminist,” “Not For Sale,” “Stop Traffic,” and “You’re Not the Boss of Me”—online, at special events and in local boutiques, including MartinPatrick3, Roe Wolfe and Apricot Lane. Along with their signature items, the new retail store will include several other brands of clothing and body products that promote advancement of women and girls.

The idea behind the clothing? To spread the message that the sexual exploitation of young girls is happening in states like Minnesota, even if most people don’t realize it.

“We’re using T-shirts as billboards, which can be really powerful,” Multerer said. “It’s about spurring conversations.”

A different type of company

My Sister was one of the first companies in the state to take advantage of the public benefit corporation structure that became available to Minnesota in 2015. It offers no tax benefits but is instead a public declaration that the company takes more than profit into account. At the end of the year, the company needs to submit documents to the state that detail how it worked toward its goals, though there’s no punishment for falling short.

“It’s encouragement from the state to be a socially responsible business,” Multerer said. “And for consumers, it’s accountability.”

My Sister focuses its public benefit not just on ending sex trafficking but also on helping those who have already been exploited. In addition to donating at least 10 percent of their proceeds to nonprofits, the company is setting up plans to create educational information for schools, develop an internship opportunity that provides skills training for exploited women and to secure employment for as many exploited women as possible. Multerer said that some of the company’s biggest goals are to bring all production in-house, including producing the actual shirts and screen printing, as well as eventually having the company run by a survivor.

So far, the company said it assisted at least 3,000 survivors by donating over $70,000 to nonprofits, a number that Multerer said exceeds the company’s goal of giving 10 percent of earnings.

“I know this is an overwhelming topic,” Multerer said. “My Sister exists to help survivors create a community where people can make an impact, a way to take action. It’s a way to make a tiny, little dent in this issue.”