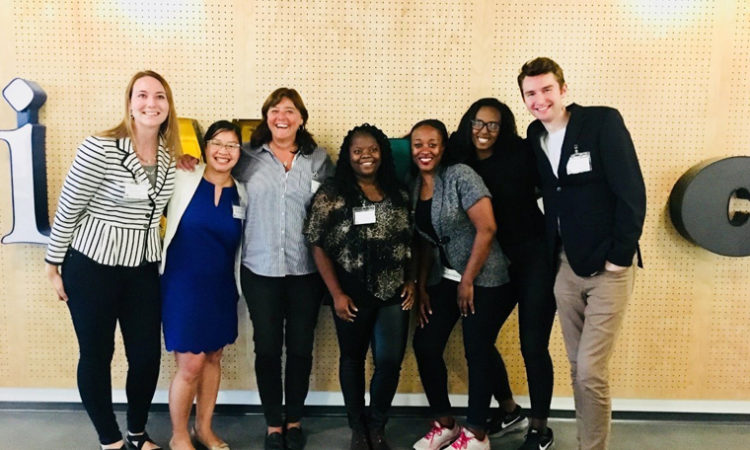 Minneapolis-based social impact accelerator Finnovation Lab is blown away by the strong demand for its programs. Applications are now being accepted for the lab’s second fellowship program.
By Amanda Ostuni
April 23, 2019

As Minneapolis-based social impact accelerator Finnovation Lab wraps up its first class of entrepreneurs and opens applications for the next group, one thing is clear: mission is the driving force behind the next wave of startups.

The level of interest around social impact-based startups has exceeded the expectations even of Jacquie Berglund, grand dame of the Twin Cities’ philanthropic startup scene. Berglund founded Finnegans, the first beer company to donate 100 percent of its profits to charity. As part of last year’s expansion to a new downtown Minneapolis brewing center and tap room, she created an accelerator program called Finnovation Lab. Applications are now being accepted for year two of the program.

From that applicant pool, five were chosen for the inaugural nine-month program, each receiving a $50,000 living stipend to participate.

Candidates for the fellowship have to be in the early idea stage of development, have a deep understanding of the issues they’re looking to tackle and what’s been attempted in that space before, and have some personal or professional connection to Minnesota. Throughout the program, they are provided with financial support, a dedicated workspace, educational resources, and one-on-one mentorship to help them get their ideas off the ground.

“This program is up and running, and we’re really excited about it,” says Berglund. “I think there’s a need for what we’re doing; I think it’s really important.”

“We see that in academic institutions across the country, and we see a lot of stakeholders in the community that want to make a difference,” Berglund says.

As more companies try to be intentional and mindful about the impact they have on the world around them, Rutledge says they’re increasingly likely to support the rising entrepreneurs whose ideas are based on impact first, dollars second.

Finnovation Lab is one of the first incubators to focus on impact-first entrepreneurs.

“Social entrepreneurs haven’t had a home to call their own, and that’s our goal here at Finnovation Lab,” Rutledge says. “We see ourselves kind of as a backbone organization for that sector.”

So far, no one cause has proven to be more popular than others, Rutledge says, from her experience both with Finnovation Lab and working with the impact division of the Minnesota Cup. She sees social entrepreneurs whose ideas span a variety of industries and social challenges, from poverty to the environment. 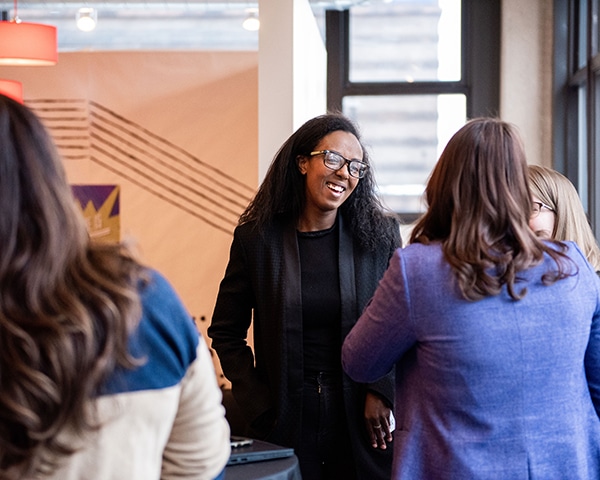 Mimi Aboubaker, founder of TUSA and a participant of the first cohort of Finnovation Lab’s Fellowship Program, speaking to Jessica Berg, director of the Minnesota Cup, at the FeMNist Showcase startup event earlier this year. (Photo by: Rita Farmer Photography).

But as varied as ideas may be, Rutledge does see common themes within the social entrepreneurship sector. A lot of ideas pitched to Finnovation Lab revolve around using technology to make a civic impact. There’s also substantial emphasis on localized missions.

“We’re a little bit more open to sustainable, steady businesses that contribute right here at home,” Rutledge says. “It’s about how can we create growth here.”

Regardless of the specific idea, early stage social entrepreneurs face similar challenges, Rutledge says. These include identifying impact and measuring success; accessing capital, since impact businesses don’t fit the mold of what traditional venture capitalists tend to look for; and figuring out the operational intricacies of a business.

Helping with these challenges is part of Finnovation Lab’s mission. And both Rutledge and Berglund say Minnesota is a good place for this kind of accelerator to exist.

“The civic history of Minnesota positions us well to feel connected to the community and to know that there’s a ripple effect from our activity, and I think the business community here has always been involved in the civic life,” says Rutledge. “So now, it’s just a matter of making that intentional across the board.”

The program connects participants with mentors from the local business community who can provide guidance and education on business planning, building financial models, and other elements of entrepreneurism.

“It’s a matter of really collaborating and coordinating on what the needs are in the market and how we can help grow these social businesses more effectively and efficiently,” Berglund says.

Finnovation is making some changes for its second cohort. Instead of having an educational class every week throughout the program, they’ll do a two-day intensive session focused on a specific topic, like writing a business plan.

Additionally, this time around, Finnovation Lab will select nine fellows, up from five in year one. Rutledge says this is part of the three-year growth plan established for the program.

“The fellowship is where we’re starting. But our goal is to…catalyze the entire ecosystem [for social business],” says Rutledge.

Adds Berglund: “I think we’re on the right track. We’re really proud of the group we just had that’s going to be graduating, and we couldn’t be more excited for the next round.”

Applications for the next fellowship are now available here, until the May 15th deadline.