SheerWind, based in Chaska, is developing the Invelox wind-energy system.
September 01, 2011 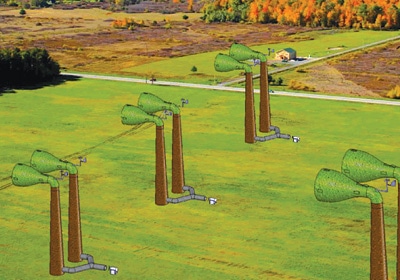 Like other technologies, wind turbines could get smaller and more powerful as they evolve. SheerWind, Inc., based in Chaska, is developing the Invelox wind-energy system. Instead of tower-mounted blades, Invelox has funnels that capture wind and direct it through small openings to turn ground-based hydrokinetic generators.

SheerWind claims it can get 200 percent greater energy output with a tower that is 50 percent shorter and has one-eighth the footprint of a conventional wind turbine. Because it can also operate at lower wind speeds, Invelox could make more regions suitable for wind farms.

CEO Daryoush Allaei says SheerWind is a pre-revenue company and will be until 2013 or 2014. But it’s an energy start-up worth watching. He expects to close on $3 million in funding in coming months, and SheerWind is being courted by Osceola, Wisconsin, with relocation incentives.