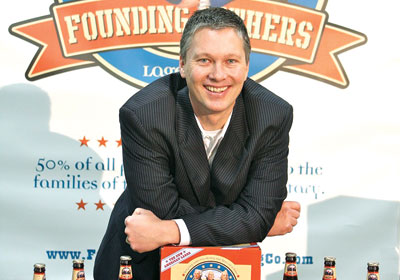 Upstart Founding Fathers positions itself as an "All-American" beer.
March 11, 2012

Though there have been numerous brewing start-ups in the Twin Cities in the past year, one of them isn’t making craft beer, or following the craft business model. In November, Long Lake–based Founding Fathers Products introduced a new “super-premium” lager targeted to the lower-price “domestic premium” market. Company founder Phil Knutsen describes super-premium as a higher-quality product than domestic premium—a category that includes Budweiser, Coors, and Miller Genuine Draft, and which hasn’t had a new entry in years.

“A lot of people thought I was crazy” to take on the likes of Bud, says Knutsen, who started Founding Fathers Products three years ago. “But other people said, ‘Thank goodness someone is.’” Knutsen seeks to position his beer as an All-American product—unlike Bud, Miller, and Coors, which though made in the USA are owned by companies based overseas.

Knutsen hasn’t taken the craft route because while sales of conventional lagers are slipping, their volumes are still “crazy high”—and he wanted the opportunity to generate enough market interest to get distributors’ attention. Another All-American differentiator for the company: Founding Fathers Products plans to donate 50 percent of its profits to military families.

Knutsen’s beer was introduced in Minnesota and North Dakota. By the end of the first quarter of this year, he expects Founding Fathers to be available in Florida, South Carolina, Tennessee, and Alabama. These states are home to large military bases, which makes them prime target markets for a beer that touts its support for the armed forces.

Knutsen himself didn’t serve, though his father and father-in-law did, and his son is a cadet in the U.S. Air Force Academy. Neither does he have a brewing background. After serving as executive vice president of Mid-America Business Systems, a Minneapolis documents and materials management company, “I was at the stage of my life where I could finish my career up there, or start something new,” Knutsen says. “I decided that I wanted to start a company that would make a difference.”

So far, the new brand appears to be making a difference for its distributors. As of mid-January, Maple Plain–based Day Distributing, one of six beverage distributors that sell Founding Fathers in Minnesota, had placed the beer in 272 package stores and 83 bars—36 of which are in American Legion and VFW halls. In the first two months of Founding Fathers’ availability, Day had sold around 4,200 cases.

“I launch many new brands,” notes Doug Jerde of Day Distributing. Selling that many cases right out of the gate, he says, “is exceptional. It’s been great for my company. It’s been very, very fun.” Jerde was looking forward to the February release of Founding Fathers’ light beer: “There are a lot of light-beer drinkers out there.”

Beer may be just the foundation for Founding Fathers. Taking his inspiration from the late Paul Newman, Knutsen says that he plans to make Founding Fathers’ parent company into a marketer of high-quality food products that “give back.” He hopes to introduce pasta sauces and other Founding Fathers–branded items after getting his beer established.

Such plans require much more funding than a typical craft brewer can scrounge up. But Knutsen was able to launch a private placement in September 2011. “After you get rolling,” Knutsen says, “a lot of people want to jump on.”

He now hopes beer drinkers will want to do the same.