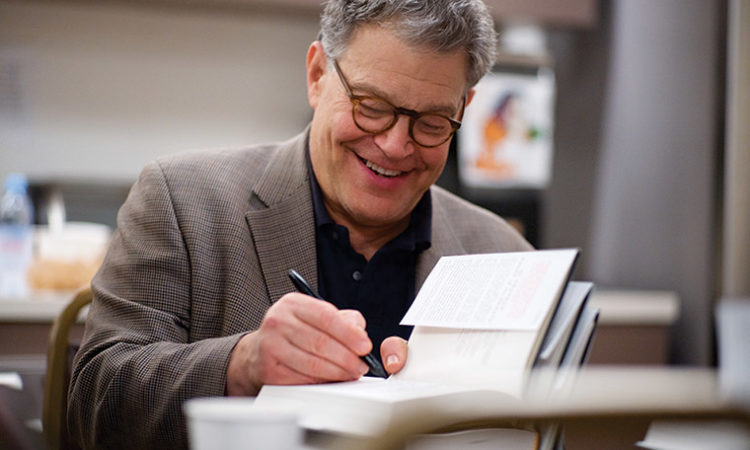 The book starts with the obligatory political beginning: You were born in a log cabin that you built with your own hands.
October 02, 2017

It is a real privilege to be able to address our only living giant of the U.S. Senate; all of the other giants (Webster, Taft, Dirksen) have moved on to Brobdingnag. Thankfully, unlike the other giants, you have bestowed upon us a book, Al Franken, Giant of the Senate, complete with a picture of you with your hand on a globe of the world. It is with a sense of honor and overwrought hyperbole that we review your book. Actually, hyperbole is the right word because, as you can tell from the title of this column, we wanted to be on equal footing with your tome.

Right off the bat, we noticed that this book does not contain the words “liar” or “lies” in the title, but you make up for that by your discussion of Ted Cruz (see below). And Norm Coleman.

The book, self-described as a journey, starts with the obligatory political beginning: You were born in a log cabin that you built with your own hands. Several chapters follow a chronological trajectory detailing your upbringing (in St. Louis Park), your attendance at Blake School (and later Harvard) and three chapters devoted to your time at Saturday Night Live. All of these parts you recount in low-chuckle form. Did I say recount? RECOUNT!

And then the recount! In rather intricate detail you go over the intricacies of the 2008 recount, complete with ballot counts and attorneys’ arguments. We’re guessing that this long recounting of the recount will be of interest—certainly not to Coleman, certainly not to the average Minnesota voter—but to you. But you do graciously note that after the recount and after you were seated in the Senate, Norm Coleman landed on his feet and secured a high-paying job as a lobbyist for Saudi Arabia. It’s kind of like the Minnesota Twins, who stage innumerable (almost yearly) reunions of their 1987 and 1991 World Series teams. But never a reunion of the first Minnesota team to lose 100 games. We know that you are a Twins fan.

And so, six months late, you get to take your seat in the U.S. Senate and that is where, to paraphrase Barbra Streisand (a contributor of yours), a giant is born. And to be frank, or as we’re all learning to say, “Franken,” this is where you learn to lose your sense of humor.

As a giant, you make giant leaps in your Senate education, quickly learning to treat all senators with deference, civility and respect (with the exception of Ted Cruz) and striving to pass legislation with bipartisan support. You also learn to blame any misstep on “staff error,” a running gag throughout the book. And the Senate. And this will surprise readers of this, the greatest column on earth: You start to develop a sense of humility.

Humble giant. As a giant, you are often criticized for being the person who brought us Obamacare by virtue of being the 60th vote. The other 59 votes don’t count. There may be in this world those who are not Al Franken fans, but they should all read your chapter on health care. Your humorous insight in describing our four systems, Medicare (like Canada), the VA (like Great Britain), employer-provided health care (like Germany) and health care for everyone left out (like Cambodia) should be required reading. This is not a joke. And it was not a staff error that you ended up on the Judiciary Committee, a booby prize for being the last senator to be seated.

And speaking of booby prizes, the book dwells somewhat on your comedic writings for Playboy, where you claimed in your infamous article “Porn-o-Rama” to have graduated from the Minnesota Institute of Titology. We won’t dwell on the particulars in those writings—not because they are unfit for the pages of this magazine, but rather because, given the 2016 presidential campaign, they seem quaint. Yes, Virginia, there really was a time when people who made body-related comments about women faced negative electoral consequences. Thankfully, giant Al, those days are over.

As with all giants, you occasionally encounter Lilliputians, and thus Ted Cruz (the chapter is appropriately titled “Sophistry”). Detailing the senator’s lack of courtesy, his lying and his complete lack of social grace, you conclude by stating you could spend a thousand years on a desert island and could not come up with a better way to show Ted Cruz’s obnoxiousness than his own behavior. As you point out, you like Ted Cruz more than any of the other senators do, and you hate Ted Cruz.

The latter part of your book details your cross-examinations (sometimes called Senate hearings) of Attorney General and former Sen. Jeff Sessions, U. S. Secretary of Health and Human Services Tom Price, and Secretary of Education Betsy DeVos. It is in this role, the shark-toothed opposition party interlocutor throwing Zeus-like thunderbolts of questions, where you have been dominating the headlines recently. Your questioning of Jeff Sessions (whose wife knit your grandson his favorite blankie) was responsible for his recusal, which led to the appointment of a special counsel to investigate the Russia/Trump nexus.

On balance, this book, while perhaps falling somewhat short of the title of this column (staff error again) is worth buying. On that point, most politicians send out their frequently ghost-written campaign books to entice contributions. You haven’t done that, which leads me to believe either 1) you really need the money; or 2) you actually wrote the book. Having finished the book, I think the latter is more likely. The footnotes and the asides are vintage Franken. Al, there’s only one more giant step for you to take.