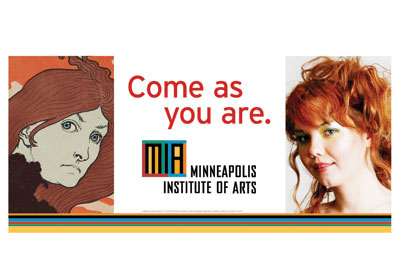 The Minneapolis Institute of Arts’ “Come As You Are” campaign.
November 01, 2011

To arts patrons, MIA stands for Minneapolis Institute of Arts. But MIA— as in “missing in action”—could also describe those potential museum goers who might find it an intimidating institution. Especially one located in a lordly structure like MIA’s nearly century– old Minneapolis edifice.

In the fall of 2009, the museum conducted market research. It confirmed what museum leaders had feared: Many find MIA a bit remote. That led the museum to bring an artistic yet accessible touch to its current ad campaign, which kicked off in early 2010.

Creative Brief
The billboards for MIA’s “Come As You Are” campaign juxtapose a face hanging in the gallery with one of a “regular” person with a similar look. (Some of the real people are stock photos; others are actual MIA patrons.)

A tandem television spot was shot in mid-2010 by WCCO-TV; earlier this year, MIA shot a video of its own. “We developed a spot internally as a viral marketing video, and liked it so much we shortened it and used it as our TV spot” on KARE11, says Kristin Prestegaard, MIA’s director of marketing and communications.

The campaign—budgeted at a few hundred thousand dollars, according to Prestegaard—dedicates 40 percent to TV and outdoor, with the remaining 20 percent split between skyway advertising, print, and on line. Except for the first TV spot, all the creative work has been done in house.

The ROI
All told, there have been a total of 150 billboards over the course of the campaign, with 10 different “sets” of faces. One patron created his own video about MIA’s faces (both artistic and human), which he posted on YouTube.

The campaign appears to be doing its job. MIA says that 2011 attendance is within its usual annual range of around 450,000 to 500,000, but more of those coming as they are, are younger: The average age of visitors is now 39, compared to 46 three years ago.

“We are now working on the next phase of what this campaign should look like,” Prestegaard says. “We’re experimenting with new twists. But we don’t quite know what those are yet.”