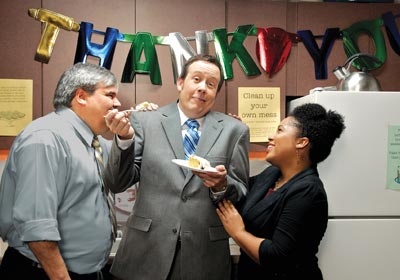 Can a campaign that shows employees thanking bosses for their insurance plan be believed?
November 10, 2012

Mention health care nowadays and people suddenly don’t feel so well. Whether it’s the byzantine benefits selection season, or the divisive Obamacare debate that knows no season, an industry that promotes wellness is all too often toxic to consumers. Which is why the campaign for Medica’s “My Plan” is so provocative. The two key targets—employers and employees—seem, well, happy.

That’s by design in the “Thank You” ads, according to Gregg Byers, creative director at Level, the independently owned Minneapolis-based agency behind the work.

“Employers and employees are very passionate about their health plans—it’s a very serious subject,” says Byers. But the spot isn’t. Instead, a series of unserious vignettes show grateful employees thanking their boss (cast as an “aw-shucks, just-me guy,” according to Byers) for choosing the flexible health plan. It’s disarmingly charming, if only because such scenes of workplace appreciation are such a relative rarity.

“The message is very serious, but we thought a little bit more humorous approach would work. I didn’t want a dreary, expected situation. Some of these visuals might be a little extreme, but I keep going back to that passion, and it’s very empowering,” says Byers.

Level itself may need to think about more benefit packages: The 19-person shop booked $7 million in billings last year, and grew about 30 percent, according to CEO John Foley.

Variations on the video version are on radio, in newspapers and magazines, and online. Due to client confidentiality, Level could not reveal billings, but the campaign will run statewide, with some spillover into Wisconsin and the Dakotas. At a minimum, the spots will be a welcome respite from the endless election ads, many of them about . . . health care.