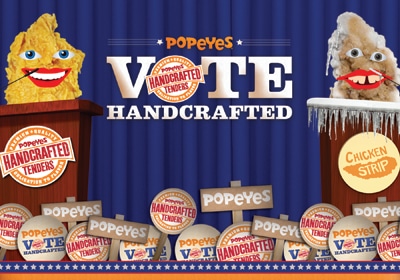 Selling It: All of the Above

Can aping a political campaign during election season be a winning strategy?
December 06, 2012

By November, mocking our electoral politics are so well-worn (and worn-out) that satire saturation develops. So maybe it’s not surprising that marketers are hesitant to jump on the bandwagon, lest they be indistinguishable from the cultural and campaign ad clutter.

But political memes are a way to tap into the country’s cultural zeitgeist—and can do so inexpensively.

“It’s nice when given the opportunity to promote a product and it happens smack-dab in an election to take advantage of the rhetoric in the market,” says Heath Rudduck, chief creative officer of Campbell Mithun (CM), the 250-person Minneapolis-based ad agency owned by Interpublic Group.

The product, Handcrafted Tenders, are chicken strips from Popeyes Louisiana Kitchen, hand-prepared at the restaurants. The difference is played up in a series of “Vote Handcrafted” web videos—debates between Handcrafted Tender and his freezer-to-fryer opponent.

Spots include “Meet the Running Mates,” which showcases dipping sauces. What’s remarkable is how recognizable the debate dynamics are. This creates a kind of shorthand language.

The cheeky (and cheesy) animated videos are down-home, to connect with a demographic of adults 25 to 35. Research was also used for the creative, Rudduck says: “It would be lovely if we could go by gut, but we don’t want to do anything that would erode [Popeyes’] position.”

CM’s digital position seems to be building, too. The media form now accounts for about 30 percent of agency billings. That may surprise some who see the august agency (80 years old in 2013) as a bastion of traditional media.

“When you read back through his creative philosophy, it is like someone wrote it two days ago,” Rudduck says. “This guy had this incredible insight on how things needed to work.”

Evidently CM was pretty smart in initial efforts for Popeyes. A “Mood Wing” app increased Popeyes’ social engagement score by 48 percent and contributed to a 71 percent jump in traffic to Popeyes.com from social sites, according to the company.