Seeding a New Neighborhood for Entrepreneurs

CoCo and Project Skyway plant a flag for new ventures at the Grain Exchange.
August 01, 2011 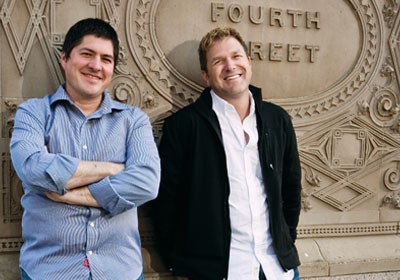 “The idea is, everything gets energy from everything else,” says Don Ball. That’s both the operating principle of the CoCo business center he cofounded two years ago and the reason for CoCo’s new relationship with tech-business incubator Project Skyway.

CoCo’s very name derives from the idea that business start-ups will thrive best in an environment of shared space for “co-working” and collaborating; that’s what CoCo provides for its rent-paying members—start-up companies, freelancers, and mobile workers of all stripes. CoCo launched in 2009 by offering work space in a Lowertown warehouse in St. Paul. This summer, it’s adding a second location in the Minneapolis Grain Exchange.

Project Skyway is the tech “accelerator” formed earlier this year by Cem Erdem, president and CEO of Golden Valley–based Augusoft software. Its inaugural class of eight technology start-ups begins three months of intensive mentoring and networking in August, all aimed at moving the seed-stage businesses toward sustainable growth.

In addition to early-stage funding from Erdem, they’ll get work space on the historic trading floor of the Minneapolis Grain Exchange, which CoCo refurbished and is slated to open in July.

In the age of Wi-fi, Skype, and cloud servers, office space is no longer required for starting a business. But even so Erdem says, place still matters when it comes to building a thriving start-up community.

“What is important is the connections; the people that you meet in a space, the people that you run into,” Erdem says. He sees the move by CoCo and Project Skyway into the Grain Exchange as the start of a hub for early-stage companies on the east end of downtown. As businesses graduate from Project Skyway, he hopes they’ll plant their seed money nearby, he says, so that eventually the neighborhood around the Grain Exchange becomes the kind of place where entrepreneurs run into advisors and investors while walking to the office or waiting in line for coffee.