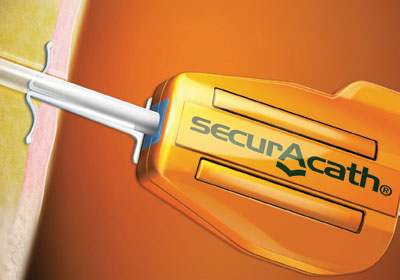 Each year, health care professionals worldwide insert 500 million vascular access catheters into patients’ veins for blood draws or intravenous medications. Traditionally, catheters are attached to patients’ skin using adhesives or sutures. But those forms of attachment can make the insertion site hard to keep clean. What’s more, adhesives can cause skin reactions, and sutures pose a risk of needle-stick injuries.

Interrad Medical believes it has a better way to keep catheters in place—and $10 million in financial backing agrees. The Plymouth-based company’s SecurAcath device, which received U.S. Food and Drug Administration approval to market its product in July 2010, is designed to anchor catheters securely, allowing them to remain in place for several months as opposed to the several weeks when sutures or adhesives are used.

The SecurAcath system consists of an anchor and anchor base. The small, blunt anchor is inserted beneath the skin alongside the catheter. “It pops into the puncture you’ve already made and then deploys under the skin,” says Gail Egan Sansivero, a nurse-practitioner at Community Care Physicians in Latham, New York, and one of the investigators in the device’s 2010 clinical trials. A cover is then placed on top of the anchor base to hold the catheter in place. When the catheter is ready to be removed, the staffer removes the device cover, pulls the catheter, and then folds and lifts the base to dislodge the anchor and remove the device. “It just pops out,” Sansivero says.

Founded in 2004 by Twin Cities interventional radiologist Michael Rosenberg, Interrad Medical first developed an all-in-one device that included the securement anchor and a peripherally inserted central catheter, which is placed in a vein of the arm and threaded into a large vein near the heart. The securing part of this device also attached the catheter at its insertion site by deploying an anchor under the skin. Interrad decided not to bring it to market. “We didn’t want to compete with every catheter company in the world,” says Joe Goldberger, Interrad Medical’s CEO since 2005. Rosenberg serves as the firm’s chief medical officer.

Instead, Interrad focused on developing and marketing a standalone anchoring system to use with all types of catheters, which became the basis of the SecurAcath device. The SecurAcath can be manufactured to accommodate all the sizes of catheters that fit large or small veins.

Since receiving FDA clearance, Interrad Medical has raised approximately $10 million in a private placement handled by RBC Wealth Management Group and RBC Capital Markets in Minneapolis. The funds are being used to support commercialization and further development of the SecurAcath device.

Shortly after launching in commercial markets in the fourth quarter of 2011, Interrad Medical was selling the SecurAcath system in the U.S., United Kingdom, and the Netherlands; Goldberger expected 20 hospitals to be using the device by the end of 2011. “Come 2012, we’ll be off to the races,” he says.