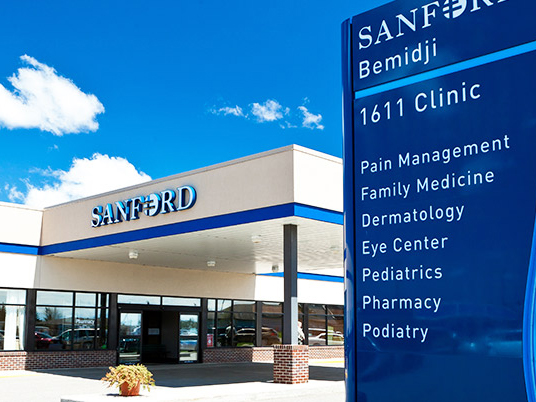 Sioux Falls-based Sanford, which has a significant presence in western Minnesota, has attempted to enter the Twin Cities health market in the past.
By Dan Niepow
October 27, 2020

Sioux Falls-based Sanford Health, which has made attempts to enter the Twin Cities health market, is now looking west.

On Monday, Sanford announced plans to merge with Salt Lake City-based Intermountain Healthcare. Both organizations will keep their names “for the foreseeable future,” officials said in a joint news release. Sanford operates a major hospital in Bemidji and several clinics throughout western Minnesota. The South Dakota health provider first entered the Minnesota market a decade ago, when it took control of the locally owned hospital in Bemidji.

Sanford’s merger with Intermountain is slated to close in 2021, according to the release. Of course, a merger isn’t a done deal just because it’s been announced. In fact, Sanford made a play for two Twin Cities health providers over the years: Once for Allina in 2012, and another time for Fairview Health Services in 2013. Neither merger panned out.

More recently, in 2019, Sanford was close to merging with Des Moines-based UnityPoint Health, but that transaction didn’t work out either. After the merger was called off, Sanford president and CEO Kelby Krabbenhoft said UnityPoint’s board “failed to embrace” the same vision for the future.

“There are still many of these mega-mergers going on, and a few of them fail or get canceled along the way,” said Allan Baumgarten, an independent health market analyst based in Minneapolis. “These are complex transactions, and during the due diligence, it’s possible that organizations find out things about one another and decide they don’t want to move along.”

But why would two health organizations decide to merge during a global pandemic in the first place? For some, it’s a way to expand geographic reach and find more sustainable forms of revenue, Baumgarten says. That hasn’t necessarily changed just because of Covid-19.

“These health systems are very much focused on growth, and I don’t think the pandemic has really discouraged that,” Baumgarten said. “If anything, a lot of these systems think that only by being larger will they be able to sustain themselves through the next pandemic or the next existential crisis that comes their way.”

He points to a recent quote from an executive of Avera Health, another Sioux Falls-based health system: “I always said that if you’re not growing you’re dying.” That came from Tom Clark, Avera’s chief strategy and growth officer, in an interview with a health publication this month.

Some health systems see mergers as a way to cut costs, too. For instance, two systems could order surgical equipment in bulk from a single supplier, instead of ordering on their own.

And, of course, mega-mergers in the health care industry have been on the rise for the past decade or so.

“The run-up of partnerships and transactions has been increasing for a number of years, probably eight or 10 years now — pre-pandemic,” said Anu Singh, managing director with Chicago-based Kaufman Hall, which studies trends in health care and higher education. “This industry has been transforming for some time.”

Nineteen health industry transactions were announced in 2020’s third quarter, according to Kaufman Hall’s latest report on mergers and acquisitions in the health care industry. That marked a sizable jump from 14 transactions announced in the second quarter.

“The pace of certain transactions that were previously announced continued unhindered by the pandemic,” the report said.

For some health care systems, mergers are the easiest avenue toward becoming “more efficient, higher quality, and more consumer-driven,” Singh said. A merger could also help make up for declining hospital revenues, which, for many organizations, had already started to sink even before the pandemic.

It’s not yet clear what the Intermountain merger would mean for Minnesota, where Sanford has a “significant presence,” Baumgarten noted.

“[Sanford’s] major hospitals in Fargo and Sioux Falls are basically serving Minnesota communities because there really aren’t large Minnesota hospitals on the western border. Most of the health care is coming out of the Dakotas in those areas,” he added.

If completed, the merger would create a combined organization with 70 hospitals and more than 400 clinics in seven states. Today, Sanford operates 46 hospitals and employs 48,000. And, though Sanford never did establish a major hospital presence in the Twin Cities, the company crept into the area through its 2018 acquisition of the Evangelical Lutheran Good Samaritan Society, a major provider of senior housing and services. The company now operates skilled nursing facilities in Maplewood, Roseville, and Inver Grove Heights.

In a Tuesday afternoon interview, Sanford Health EVP Micah Aberson said the prospective merger would lead to “growth for the system, opportunity for our employees, and access for our patients to an enhanced level of care delivery.”

“I think it’s a good news story all around,” he said.

Aberson also said that Sanford and Intermountain are “forever organizations in the communities that they serve” — something that Intermountain CEO Dr. Marc Harrison touched on during a press conference on Monday.