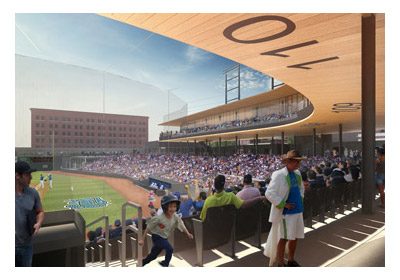 Ryan Companies recently awarded contracts to six companies, five of which are from Minnesota, to help build the structure of the new Lowertown Ballpark for the St. Paul Saints.
June 01, 2014

Ryan Companies, the Minneapolis-based company charged with constructing the new $63 million ballpark for the St. Paul Saints, has selected new subcontractors for the project—and the vast majority of the work is being completed by Minnesota firms.

The City of St. Paul announced Thursday that Ryan recently awarded contracts to six subcontractors, five of which are based in Minnesota. In all, 97 percent of the work on the Lowertown Ballpark will be completed by Minnesota companies, the city said.

Here’s a breakdown of the latest contracts:

• Hockenbergs of Eagan will install food service equipment at the ballpark.

• Schindler Elevators, which is also based in Eagan, will install three hydraulic passenger elevators and one hydraulic service elevator.

“Awarding these contracts is another huge step in the process of building this ballpark,” Mark Maghrak, team leader for Ryan Companies, said in a statement. “We have a great team, and we worked very hard to find as many local companies as possible. It’s exciting that so much of the money being spent to build this project will stay here in Minnesota.”

Following demolition of an existing structure, construction on the ballpark began last month, and the Saints are expected to begin playing on their new field in May 2015. View renderings of the new ballpark here.