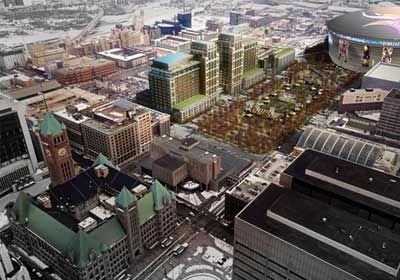 The development company’s purchase of four blocks will allow it to move forward with the planned $400 million Downtown East redevelopment project.
February 22, 2014

In a deal finalized Tuesday, the Star Tribune Media Company sold five city blocks, reportedly for $38.5 million, to be used for housing, offices, parking, retail shops, and a park near the planned Vikings stadium.

The company sold four blocks to Minneapolis-based Ryan Companies—which in May announced plans for a $400 million Downtown East redevelopment project—and one block to the Minnesota Sports Facilities Authority (MSFA), which is overseeing construction of the new $975 million Vikings stadium.

Ryan paid $30.8 million for its portion of the property, according to the Pioneer Press, which cited documents from the Minnesota Department of Revenue. To occupy the four blocks it purchased, Ryan has proposed two office towers spanning 1.2 million square feet; 200 apartments; stores and restaurants on street and skyway levels; a six-level, 1,610-space parking garage; and a public park that will span nearly two city blocks. Construction of the redevelopment project is slated to begin this spring.

Wells Fargo & Company, which signed on to Ryan’s redevelopment plan in December, will move roughly 5,000 of its employees into the new office buildings.

Meanwhile, the MSFA—which purchased its block for $7.7 million, according to the Star Tribune—will use the land for a parking ramp.

The Star Tribune’s headquarters is part of the property sold to Ryan and the MSFA. The newspaper’s offices will be demolished and approximately 600 employees will relocate next year to a yet-to-be-named location in downtown Minneapolis, the newspaper said.

Ryan’s Vice President of Development Rick Collins said in a statement that closing on the land purchase was a “significant milestone” in bringing the Downtown East redevelopment project to fruition.

“We appreciate the strong commitment of our client, Wells Fargo, to Downtown East,” he said. “And, we are grateful for the working relationships Ryan has built with the MSFA and the Minnesota Vikings, and the extension of our long-term relationship with the City of Minneapolis.”

Ryan and Wells Fargo are currently finalizing plans to submit in an effort to acquire building permits and other approvals, to meet a May 2014 groundbreaking date. The initial phase is expected to reach completion by mid-2016, the company said.

Recently, Ryan was one of the companies to submit a bid for the “air rights” above the parking ramp near the planned Vikings stadium. Ryan proposed a $104 million, 28-story apartment tower with restaurant and retail space.

Golden Valley-based Mortenson Development, Inc., is also vying for the “air rights” above the ramp. That developer’s plans call for a $63 million, 300-room hotel.

Ryan is the second-largest general contractor in Minnesota, based on its dollar volume of construction, which totaled $775 million for its most recently completed fiscal year.