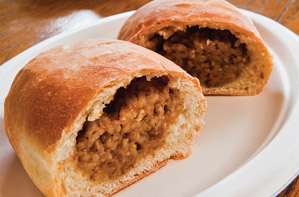 Russia’s Entry in the Burger Wars

“The year of the burger” last year in the Twin Cities—openings of Burger Jones, Galaxy Drive-In, American Burger Bar, and Smashburger, to cite just a few—continued into 2010 with this winter’s Food Wars face-off on the Travel Channel: Matt’s Bar versus the 5-8 Club to determine who makes Minneapolis’s best Jucy (or Juicy, depending on whose camp you’re in) Lucy. Maybe it’s the economy. Burgers tend to be easy-on-the-pocketbook comfort food.

But if you’ve sampled all those new spots already, remember that ground meat with a bun is global. No accounting firm certifies how many billions have been sold, but Russia’s piroshki is also beloved by the masses.

Typically, the inside consists of seasoned ground beef, rice or potato, and add-ins such as cheese, onions, mushrooms, chopped egg, or cabbage. The outside is a relatively thin layer of dough, sometimes egg-washed, that’s baked or fried.

You don’t have to consult Food Wars on this one: The best place in town to try a piroshki is St. Paul’s Russian Tea House.

Proprietors Nick (Nikolai) and Linda Alenov call their restaurant, which they opened in 1978, the first Russian fast-food carry-out in the country. Their restored Victorian on University Avenue is open only Tuesday through Friday from 11 o’clock to 3 o’clock. It has a very short menu of Russian specialties that varies daily and includes potato-filled dumplings known as varaniki, tomato-sauced cabbage rolls, and little bags of amazingly good nut cookies, Russian tea cakes.

By far the best seller, though, is their piroshki. The beef, seasoned with just salt and pepper, is blended with sharp cheddar cheese, caramelized onions, and rice, and baked inside a bun that’s both crusty and chewy. Nick Alenov jotted down his recipe while watching his mother, an immigrant to the U.S. after World War II, make them in her kitchen. This is a very traditional rendition of this Russian favorite, and you’ll be hard pressed to limit yourself to just one.

You don’t have to. You can even get a box of half a dozen frozen piroshki to go. Warm them up next time the burger craving hits and you don’t want to fire up the grill.