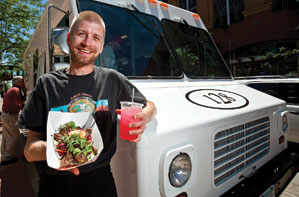 The 128 Mobile CafÃ© roams freely, and chef Ian Pierce has put together a menu of affordable eats, including ginger-soy beef skewers with red-cabbage slaw and cashews.

Will Minneapolis get with the mobile restaurant trend?
By Peter Lilienthal
August 16, 2010

While major metros around the country host mobile restaurants that tweet their whereabouts to loyal followers, Minneapolis is stuck in park. The city council passed a measure in April that allows food trucks to operate—but only downtown and only from a single permitted location, and that spot has to be on a sidewalk or parking lot rather than the street.

Doug Kress, a policy aide to council member Lisa Goodman, who proposed the measure, says downtown made sense as a starting point because it’s where people gather and it’s in Goodman’s ward. He says requiring nonmobile, off-street operations sidesteps problems the trucks might have finding a parking meter on the busiest streets, and problems the city might have if it took meters out of public service to accommodate the trucks.

Meanwhile, the coalition of businesses that form the Downtown Improvement District has objected to the food trucks, saying they’ll block foot traffic to nearby retail and create a need for more cleanup and maintenance at downtown property owners’ expense. At least one building owner also objected to increased competition for downtown restaurants from the trucks.

Minneapolis finally issued permits to its first four applicants in late June. But restaurants including Saffron and the Salty Tart are delaying their food truck plans until the dust clears.

For now, at least, the best way to partake of the mobile restaurant trend is to head to St. Paul, where permitted trucks roam freely and need only plug a meter to set up shop.

Just rolling out in late June is 128 CafÃ©’s new 128 Mobile CafÃ© (twitter.com/128cafe). The short menu includes the restaurant’s signature ribs—fall-off-the bone tender and deliciously sauced—and the heavenly, garlicky Caesar salad. But Chef Ian Pierce says the emphasis will be on “affordable items such as creative sandwiches and skewered meats.”

Another standout is the Chef Shack (twitter.com/chefshack1). Veteran mobile chefs Lisa Carlson and Carrie Summer appear regularly at farmers markets around Minneapolis on weekends and just got a permit to operate in a parking lot at Fifth Street South and Hennepin Avenue in Minneapolis during the week. But they’ve been cruising St. Paul for several months already, serving eclectic fare that includes their much-craved pulled-pork nachos and Indian spice mini donuts.