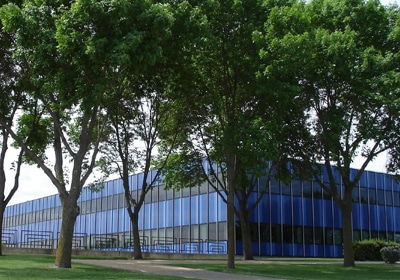 One of the earliest adapters of Mayo Clinic’s push to encourage local entrepreneurship among its bio-researchers is preparing to leave the nest of Mayo’s business incubator for a much larger lab/manufacturing space elsewhere in Rochester.

Vyriad Inc., a clinical-stage biotech company developing new kinds of virus therapies to treat cancers, told TCB it has leased 25,000 square feet for lab space, offices and other uses in the now-vacant Building 110 on the IBM campus. The computer giant has consolidated its operations within the 34-building, 3.1 million-square-foot campus along N.W. Hwy. 52, offering several buildings for lease while also seeking a sale-leaseback buyer for potentially the entire 500-acre collection.

Dr. Stephen Russell, Vyriad’s CEO and director of Mayo Clinic’s molecular medicine program, is an enthusiastic backer of the clinic’s recent direction of allowing faculty members and other researchers to spin off their discoveries into commercial startups, hopefully to stay and grow in Rochester.

That goal, in turn, is linked to the broader Destination Medical Center effort meant to transform the city into a world-class magnet for health care-related development and investment.

Vyriad began in 2012 as Omnis Pharma with oncolytic virus therapies developed at Mayo by Russell and research associate Shruthi Naik, and licensed from Mayo Clinic Ventures. The company also received a seed investment from MCV and in 2014 took up residence at the Mayo Clinic Business Accelerator when it opened as part of an effort to spark a self-sustaining bio-business scene in Rochester.

Because human immune systems don’t attack it as a threat, a large dose of VSV is free to reach tumor cells en masse, there delivering a genetic payload causing those cells to self-destruct. Meanwhile, even the closest non-infected cells are spared from harm, suggesting viral oncology could represent a huge advantage over the now-dominant forms of chemotherapy in that regard.

An added benefit of the oncolytic virus approach seen in pre-clinical trials is that it also stimulates the body’s own immune system to guard against tumor recurrences.

Since its founding, the company has steadily grown with the help of an angel investment from Alvin McQuinn, founder of Jackson-based Ag-Chem Equipment Co., and now chairman and CEO of QuinStar Investment Partners. McQuinn in December was appointed to the company’s board of directors.

In January 2015, it signed a lucrative licensing deal with pharmaceutical giant AstraZeneca and its subsidiary MedImmune to study, improve and potentially commercialize its oncolytic viruses by pairing them up with the pharma’s anti-cancer immunotherapy drug candidates. The idea is that by toggling the viruses with drugs that enhance the body’s natural immune response, the anti-cancer effect can be amplified.

Russell says the pending move to the IBM site is awaiting the completion of an ongoing financing round, but is otherwise set to go.

“We’ve done the work to set up our clinical trials, and so the next step was finding a new home, because we’re growing,” he said.  “We’ll have need of developing our own manufacturing capabilities, such as building our own viruses and our own labs, as well as using more office space.

“Looking around Rochester, the golden opportunity that arose was that IBM had vacated quite a lot of space on their campus. We went over and had a look at Building 110, which was empty. It was originally built for chip manufacturing, and so has phenomenal air-handling units on the roof. You can really build any kind of manufacturing capability you want in there.”

Because it’s not located in downtown Rochester, the build-out wasn’t eligible for funding through the Destination Medical Center process. However, Vyriad gained city backing in a bid for a Minnesota Investment Fund subsidy from the state Department of Employment and Economic Development. That program supplies funding to Minnesota cities earmarked as loans for expanding companies seeking to offset capital equipment costs. In exchange, the recipients are expected to create high-paying positions.

Also relocating to the same former IBM building is another ex-Mayo Business Accelerator tenant, Imanis Life Sciences, a contract research provider that frequently works with Vyriad on oncolytic virotherapy. Russell is also CEO of that firm, which he said will be leaving its current space in downtown Rochester’s Minnesota Biobusiness Center.