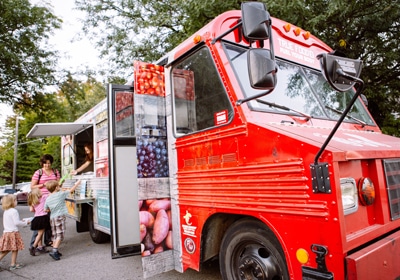 Food trucks are likely to get the OK to park on public property in Rochester, although the spaces will be zoned off and come with sizable fees.
May 05, 2016

Rochester city officials hope to settle a nearly yearlong feud between established restaurants and food trucks over downtown parking at a meeting next week.

Out of concern that mobile eateries were taking a bite of local restaurants’ business, a city ordinance was created to ban food trucks from parking on public property, effectively kicking them out of the city. That ordinance is likely to be reversed on May 2 by the City Council, said Aaron Reeves, city clerk for Rochester. However, the change won’t come without several caveats.

Under the current proposal, three zones will be established for food trucks to operate within. During the lunchtime rush—from 9 a.m. to 2 p.m.—trucks will be allowed to function in marked zones outside Mayo Clinic’s headquarters. Those available spaces will shift in the evening hours—from 9 p.m. to 1 a.m.—to a different side of the Mayo campus along 2nd Avenue. Reeves said the city is likely to open a third zone without time restrictions that is a half-mile away from Mayo, in an area adjacent to the public library and Central Park.

Additionally, most of the food truck spots will be spaced 150 feet from competing brick-and-mortar restaurants, but this rule won’t strictly apply to every zone.

“The spaces for the late night dining [won’t be 150 feet away],” Reeves said, “but in that area most of the restaurants close at 10 p.m. So there won’t be much conflict there.”

Reeves said the $1,500 breaks down into two parts: application and franchise fees. The application fee is said to cover vehicle inspection, paperwork review and other starting costs. The franchise fee was calculated by the Rochester City Council and was based on revenue the city believes it would generate instead by metering the designated spots. (Although Minneapolis determined its franchise fee would amount to less, the city does also require food trucks pay for meter space when parking on non-designated streets.)

“We’ll have more discussion at the council meeting on May 2nd, so I’m sure some of these things could change,” Reeves said, “but from what I understand something will be adopted. And if that’s the case, food trucks could start operating as soon as that following week.”

It is believed roughly eight to twelve food trucks operate throughout Rochester. According to Reeves, Rochester’s food truck regulations are based on the rules established in Minneapolis.