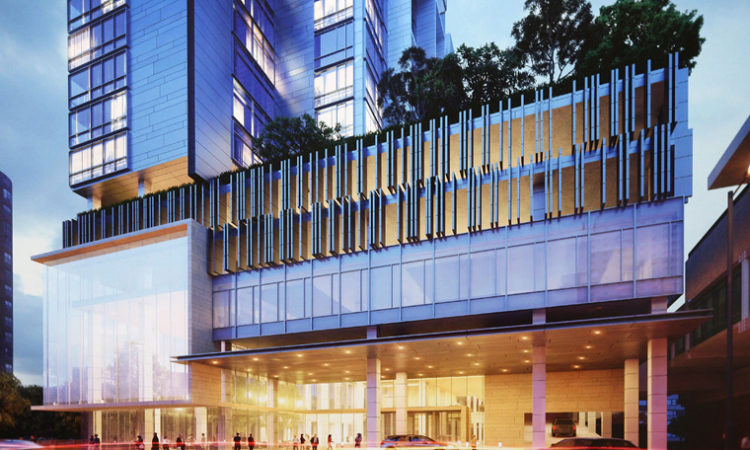 A rendering of the Bloom Riverfront Towers. ( Photo by AE7)

The Destination Medical Center project is attracting at least $100 million in hotel investments to downtown Rochester, where plans for no less than three new hospitality projects are in various stages of building approvals and potential tax subsidy deals this summer.

The three projects, if all are completed, would provide 529 new or renovated hotel rooms within the city’s DMC development areas near the Mayo Clinic.

The flurry of recent activity includes two completely new developments pitched by out-of-state backers and the complete remodeling and re-branding of an existing hotel long considered to be an eyesore at a high-profile spot leading into downtown Rochester.

The biggest of them at nearly 1 million square feet is the Bloom Riverfront Towers. Bloom International Realty, a development company based in Abu Dhabi, has already landed preliminary city approvals for its building plans, which include a pair of mixed-use towers on a city-owned property along the Zumbro River.

The massive project which would feature 181 hotel rooms among its offerings. Under the plans, its north tower would be 28 floors high, while the south tower would be 21 floors. Along with the hotel, the $233 million project would feature approximately 215 units of senior housing; around 132 owner-occupied condominiums; a two-level skyway connection; nearly 500 structured parking spaces; and retail elements on the street and skyway levels.

Its location in the Downtown Waterfront DMC subdistrict qualified it for public infrastructure assistance from the state-funded Destination Medical Center Economic Development Agency. In late June, its board of directors approved $6 million in assistance.

Bloom International is also seeking a further $14 million in tax increment financing (TIF) from the city of Rochester to “close the financial gap” for the project, which if completed would boost annual property tax revenues by $2.4 million. City council members this month approved the creation of a new TIF district for the project but have yet to sign off on a development agreement or approve the final building plans.

Construction is proposed to begin in January and be completed by December 2019.

The second proposal isn’t new construction but rather the complete rehabilitation of the existing downtown Rochester Holiday Inn, which was recently purchased by an entity related to Newport Beach, California-based EKN Development Group.

The hotelier has yet to file any formal building plans for the property a 220 South Broadway but has asked the city for a total of $3.3 million in combined TIF financing and DMC funding to help facilitate the Holiday Inn’s $42 million makeover into a Hotel Indigo boutique brand.

For city officials, one of the main benefits of EKN’s plans would be the removal of the monolithic concrete exterior panels of its faÃ§ade, which have been roundly denounced as longtime eyesores. In their place will be glass panels opening up the hotel interior to the outside. The project would also include updating of the hotel rooms, lobby, restaurant and the adjacent streetscape. 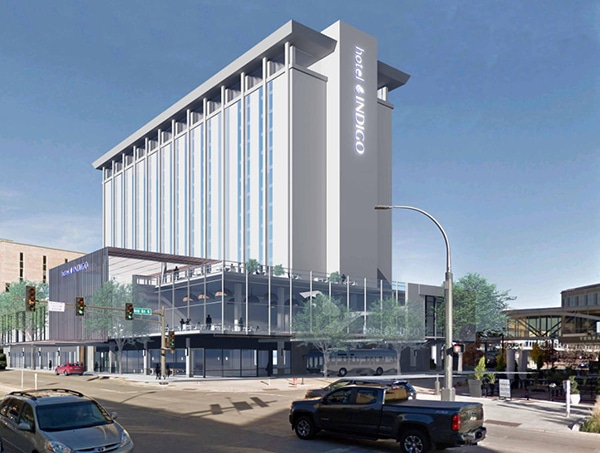 A rendering of Hotel Indigo in Rochester. (Photo from EKN Development Group)

The renovation, DMC officials wrote, would “dramatically enhance the Broadway Avenue streetscape at a location that is a prominent point of first impression of the city for visitors arriving from the airport to the south driving in along Broadway.”

The hotel is within the DMC Downtown Waterfront subdistrict and thus was looked upon favorably upon by the organization’s board, which okayed a $1.45 million contribution for the effort.

The same California hotelier, EKN Development Group, has also won preliminary building approvals for a new-construction project in downtown Rochester, this one a Hyatt House and Suites upon the longtime site of an American Legion post.

Situated on the southwest corner of Civic Center Drive and 1st Avenue N.W., the Hyatt project is valued at $44 million and would consist of an eight-story, 175-room extended stay hotel, along with a 102-stall parking ramp. City planners say the guest rooms will include kitchen and living areas to serve the longer-term guests.


In addition to generating $500,000 more in annual property taxes than the Legion post, DMC officials noted the prospective hotel’s location is “a gateway” into the Mayo medical campus. Within easy walking distance of clinical facilities, it could potentially give visitors with longer expected stays a new close-by lodging option.

The Hyatt proposal, they declared, also has the “potential to be a catalyst for other construction on the northern half of the DMC Development District.”

The Rochester City Council has given preliminary approvals to its building plans. Meanwhile, EKN is seeking $4.3 million in TIF financing for the effort, of which $1.95 million would be covered by the DMC. A groundbreaking is slated for late fall with the hotel’s completion and opening projected for the end of 2019.