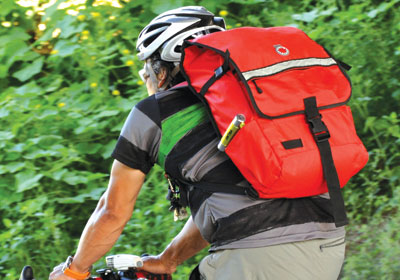 The cluttered racks, the Nice Ride stations, and the stylized bikes painted on city streets all attest to the well-publicized fact that the Twin Cities has become a focal point of the national cycling boom. What’s less known is the number of small, locally based manufacturers that have popped up because of the boom. Let’s meet a couple of these companies.

Eric Leugers and Mike Vander-scheuren “were corporate slaves,” as the latter describes the business partners who founded Minneapolis-based bicycle bag maker Banjo Brothers. Product manager Leugers worked with marketer Vanderscheuren in product development at the Minnesota branch of Finland-based consumer-products and cutting equipment company Fiskars. When Fiskars spun off the division in 2004, giving both helpful severance packages, the friends decided to become entrepreneurs.

The duo didn’t go into the bag business right off—their first venture was a line of casual watches. But being inveterate cyclists, they found themselves spending time in bike shops. The company that became Banjo Brothers got its start with “Eric going into a bike shop and seeing what the cost was of the products that the shops were selling, and looking at the [bike bags] that we were doing and saying, ‘Well, this thing is completely overpriced and it doesn’t look like the shop itself is making money at this,’” Vanderscheuren recalls. “So we thought, therein lies the opportunity to leverage what we knew and create value for the independent bike dealer. And on the consumer side, feeling like they’re getting a good deal as well.”

With their experience in the cut-and-sew industry, Leugers and Vanderscheuren reconnected with a factory in southern China that they’d done business with while at Fiskars.

“That part was the easiest—figuring out how to get them made,” Leugers says. “Doing the designs, selling, and marketing were the tricky part.” Still, Vanderscheuren adds, “the [product] development process was very similar. The customers were different but it still follows the same process. We knew what we were getting into—to some degree.”

The duo’s timing has proven to be as sharp as that of Flatt and Scruggs. After starting with seven Twin Cities shops, Banjo Brothers now sells its bags worldwide (Banjo bags are available in Canada, Australia, and the U.K.), with about 80 percent of sales outside Minnesota, though its biggest individual customers are in the Upper Midwest. All told, it sells to more than 500 dealers. Banjo Brothers says that it saw a 38 percent increase in sales over 2010, and it expects to see an even bigger jump this year.

What’s the story behind the name? Says Leugers: “I believe that it was along the lines of: We wanted to start a company, and I believe Mike said, ‘How about Banjo Brothers?’ I did a quick search, and ‘Oh, there doesn’t appear to be another Banjo Brothers making any bags, let’s go for it.’”

“We’re not brothers, we don’t play the banjos, and banjos are kind of funny,” Vanderscheuren says. To which Leugers adds, “Neither of us takes ourselves too seriously.”

But the “brothers” do have a serious value proposition. The company’s eight styles of bags—all designed by Leugers—focus on function and durability rather than high style and annually updated models.

“To be fair, our products have their own sort of chicness to them,” Vanderscheuren says. “You can see that the designs are deliberate. To some degree, they’re not super-flashy. On the other hand, there’s a style to them: well-made, simple, basic.” “When people look at the product and they look at the price, it’s ‘Wow,’” Leugers says. “And the fact that we’re a small owner-operated company resonates, because almost every bike shop is owner operated.

“We have a personality,” Leugers adds. “And we try to be easy to do business with.” Part of that directness is running lean: Banjo Brothers still has just two employees (the brothers themselves), though the partners do tap into several subcontractors (an IT firm, designers, and others) to keep the company rolling.

Many of the same local and national bike dealers also are customers of Rain Shield, a Minneapolis producer of raingear for cyclists under the O2 brand. Like the Banjo brethren, Rain Shield owner Adam Ziskin runs a lean operation, with all of his assembly done in China. He, too, has carved out a space in the market that’s firmly ensconced between dirt-cheap and top-of-the-line. But his company followed a less direct trail into the biking market.

Rain Shield was founded in 1997 (Ziskin joined the company a year later) to create athletic garments using a high-tech water-resistant and breathable fabric that 3M originally developed for the health care market. Its first customer was Target. In 2004, Rain Shield acquired some other licenses and started making commodity-type rainwear under national brands, and selling to mass retailers as well as mid-market retailers—“medium boxes,” as Ziskin describes them, a category that includes sporting goods stores.

A few years ago, the commodity business began to dry up, and Ziskin decided to reposition Rain Shield to focus on the biking market. Starting in 2010, he says, “I put a lot of time into rebranding—from website to hangtags to look and feel to who we’re sponsoring, who we’re associating with, what we’re proud of, and bringing ourselves up to date.”

These days, 90 percent of Ziskin’s business comes from bike dealers. The remaining 10 percent of its products fall into several categories: “some industrial, some golf, some running, and some private label.” The company expects to sell about 30,000 units to the bicycling market this year, with the higher-end products looking particularly strong, he says.

In the early 2000s, Ziskin’s company took the fabric overseas for product assembly. All its products are now made in China. “We couldn’t compete without going overseas.” Just one fabric is US-made; the rest are from Asia. The materials are always a blend of a nylon, polyester, and lycra, but “there’s always the latest stretch or the latest reflective. Every year is a little different—whether it’s ripstop or non-ripstop. You go with the trends, see what everyone else is doing, and try to keep up.”

Ziskin designs them, for the most part. “A lot of it is, I’ll go see what’s in the marketplace, I’ll go see what we’re doing, and if I think we’re behind in a technology or an attribute, I will talk to my factory about that, and I’ll usually draw something up and send it to them,” he says. “Or even take a picture of what I’m talking about and send it to them and they’ll come back with the problem that that type of design would have if you wanted to add this to it. A lot of my designs evolve. A couple of them are brand-new every year, and a couple of them evolve, because we have a couple of staple items.” He adds: “To be a full rainwear company, we have to have all the price points.”

One of Rain Shield’s lightweight rain jackets was recently showcased in Bicycle Retail and Industry News’ commuter gear review in mid-March. (A Banjo Brothers bag was also included in the roundup.) Ziskin says that hiring a PR agency “helped a ton. That got me tons of reviews.” Like Banjo, Rain Shield doesn’t have the money to do much advertising; most of its promotion work is done via e-mail, trade shows, and in-store events.

“If you go apples to apples, we’re very transparent with waterproof and breathable,” Ziskin says. “We say it on our hangtags, so we always want the consumer to know what apples to apples is, because if you look at a competing brand at the same price, ours will most likely be more breathable, just as waterproof, and probably have more attributes for about 20 percent less. That’s where we usually sit.” The tags include specific data about the waterproof and breathable properties. “I would say that probably 25 percent of [customers] know what that means,” Ziskin says. “But certainly the people at the store know what that means.”

One of those knowledgeable types is Luke Breen, owner of Calhoun Cycle in Uptown Minneapolis, which carries both Banjo and Rain Shield. “They’re both aiming at high value,” Breen says. “They’re not aiming for the most expensive or the premier product—they want to offer a really good value at every price point that they have.”

For Breen and other dealers, Banjo and Rain Shield fill useful niches in their stores. “We don’t have a lot of space,” Breen says. “We are an urban bike shop with a couple thousand square feet that we’re working with. We have to be really smart about what we’re selling.” The two companies’ product lines allow him to be just that.

Call it a sound marketing strategy.