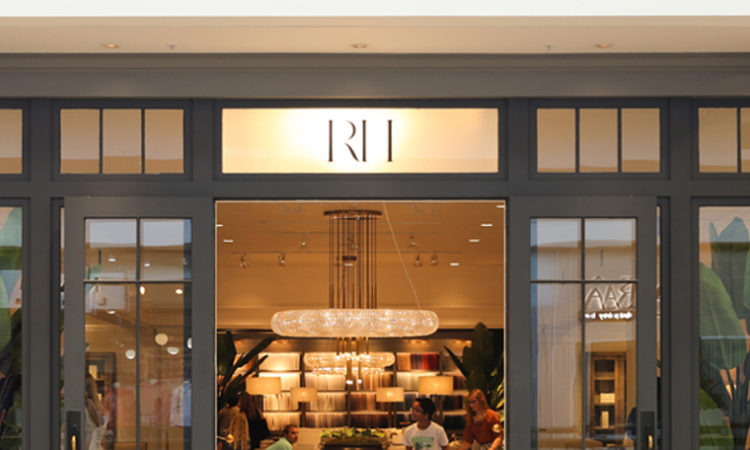 The upscale home furnishings retailer is testing the waters with a short-term lease.
By Allison Kaplan
June 07, 2018

The store went up seemingly overnight without fanfare. “They didn’t want us to say anything until they opened,” says Jesseka Doherty, vice president of leasing for Mid-America Real Estate, which counts the outdoor center at the corner of I-394 and Highway 100 among its retail properties. “We are very excited to have Restoration Hardware at West End.”

This is the first Twin Cities outlet for Restoration Hardware, which has a full-priced store at Galleria in Edina, and is currently building a much larger stand-alone store that will include a restaurant, across the street in the parking lot of Southdale. West End property manager Jodi Coyer says RH Outlet signed a one-year lease to test the waters. The outlet occupies just over 10,000 square feet—a space that used to house accessories retailer Charming Charlie, which filed for bankruptcy last year.

Restoration Hardware, known for its imposing pieces and relaxed luxury, has taken its brand more upscale in recent years, selling $6,000 sofas and dining tables that top $7,000. A $100 annual membership gets shoppers a 25 percent discount on all purchases. The outlet offers original RH furniture at 20 to 60 percent off.

West End has hosted weekend outlet events for retailers such as lululemon, but RH is the center’s first permanent outlet store. It opens a new category at a center dominated by women’s specialty retailers and restaurants.

Leasing has been a struggle at West End since it opened during the recession of 2007. A handful of boutiques, including the locally-owned Creative Kidstuff and Primp do well—lululemon and Evereve even expanded. Restaurants including Crave and Rojo often have waits and the movie theater seems busy, but many other stores and restaurants have come and gone quickly. Certain spaces on the west side of the center have never been filled. It’s long been a conundrum: situated just minutes from downtown Minneapolis, West End is surrounded by office buildings and new apartments.

Doherty says several deals are in the works, but nothing she could share just yet.