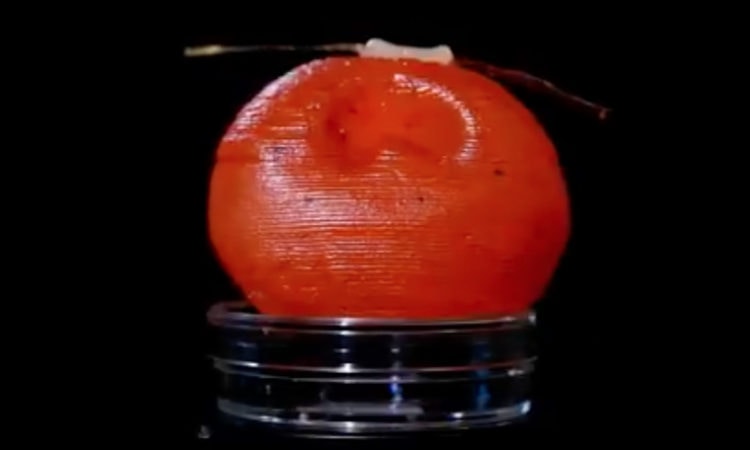 The study’s lead researcher, Michael McAlpine, said the discovery could be a “game-changer” and lead to fewer medical errors during surgery.
By Sam Schaust
December 06, 2017

With the use of a custom-built 3D printer, a team of researchers led by the University of Minnesota has successfully created artificial organ models that they believe could revolutionize the way medical professionals prepare for and tackle complex operations.

While the concept and practice of 3D printing lifelike organs has been around for years (and adopted by health organizations like the Mayo Clinic), a 17-person research team—of which all but three are located at the U—claim they have made a significant advancement in the technology’s capabilities.

Instead of using hard plastics or rubbers to print their organ replicas, researchers from the U, as well as Cornell University and the University of Washington, developed customized silicone-based inks they said could be “tuned” to match an individual patient’s tissue. (In the case of this study, which was published in the journal Advanced Materials Technologies, researchers made samples based on three patients’ prostates.)

From their experiment, the researchers were able to produce patient-specific organ models that mimicked the exact anatomical structure, mechanical properties and the look and feel of real organs. Each model also included soft sensors that the researchers believe could help surgeons anticipate how an organ could react to various surgical tools.

“The sensors could give surgeons real-time feedback on how much force they can use during surgery without damaging the tissue,” said Kaiyan Qiu, one of the lead authors of the paper and a mechanical engineering postdoctoral researcher at the U, in a statement. “This could change how surgeons think about personalized medicine and pre-operative practice.”

To protect their findings, the research team has applied for a patent on the technology used during their study.

Michael McAlpine, the lead researcher of the study, said his team’s discovery could be the next step toward a greater goal: the creation of transplantable organs.

“If we could replicate the function of these tissues and organs, we might someday even be able to create ‘bionic organs’ for transplants,” he said in a statement. “I call this the ‘Human X’ project. It sounds a bit like science fiction, but if these synthetic organs look, feel and act like real tissue or organs, we don’t see why we couldn’t 3D print them on demand to replace real organs.”

The research project—titled “3D Printed Organ Models with Physical Properties of Tissue and Integrated Sensors”—was funded primarily by the National Institutes of Health. Additional support came from the National Institute of Biomedical Imaging and Bioengineering and the National Heart, Lung and Blood Institute, as well as the University of Minnesota-Twin Cities.

For more on how the research team developed their unique, 3D printed organs, watch the video below:

Source: the University of Minnesota's College of Science and Engineering