It seems all those years of asking, “Can you hear me now?” have paid off: According to a recent report, Verizon outperformed AT&T, Sprint, and T-Mobile in Twin Cities based on its data, call, and text capabilities.
July 20, 2013 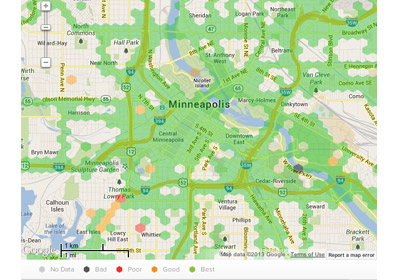 The group, RootScore, said it conducted more than 47,000 “mobile performance tests” throughout the Twin Cities to see how AT&T, Sprint, T-Mobile, and Verizon compared. It examined which carrier provided the fastest download and upload speeds, the most reliable and fastest email and Web service, the least dropped and blocked calls, and the strongest text service.

Verizon and AT&T tied in the call and text categories, but Verizon topped its competitors for data performance, helping it earn the top overall performance score. Overall scores were calculated using an algorithm that factored in results from the three categories. Trailing Verizon (which had a score of 97) in the combined category was AT&T (95), T-Mobile (91), and Sprint (81).

RootScore said it measured performance both indoors and outdoors, during all hours of the day and night, and with tests that focused on activities that consumers perform most often: making phone calls, uploading and downloading files from the internet, browsing the web and using apps, and sending and receiving text messages. The testing was conducted from May 31 to June 6.

This was the group’s fourth report for the Twin Cities market. In addition to ranking the carriers, RootScore also noted improvements from its last test in August 2012.

According to the report, AT&T’s average download speed more than tripled, while its average upload speed was more than six times faster than it was last August. A big contributing factor was the carrier’s launch of 4G LTE in the Twin Cities in November, and its further LTE Minnesota expansion earlier this month, RootScore said.

Although T-Mobile just officially announced the launch of LTE in the Twin Cities on Wednesday, RootScore said it still measured “significant time” on LTE for T-Mobile as well, and its average download speed nearly doubled and upload speed is moving six times faster than it was last August. However, despite both AT&T’s and T-Mobile’s improvement, Verizon still won the data performance categories.

Although it came in last, the report also noted that Sprint made large strides in its texting speeds, improving the rate of texts it delivers in less than 10 seconds.

Compared to last year’s report, all of the carriers improved their combined scores except for Verizon. Verizon went down from a score of 103, T-Mobile increased from 72, AT&T increased from 62, and Sprint increased from 58.