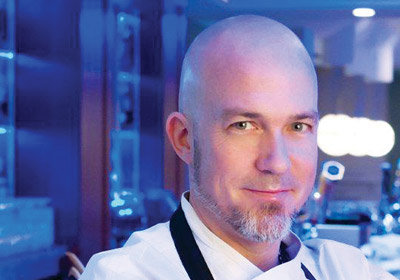 The celebrated steakhouse is being reinvented from the Twin Cities.
May 11, 2012

If there is a brand that epitomized the golden era of the late 20th century, it’s Morton’s The Steakhouse. From the tuxedoed wait staff to the cigar bar to the trolley presentation of various raw cuts of beef and live lobsters to the signature soufflÃ©s, Morton’s was the ‘80s . . . and ‘90s . . . and ‘00s. But then the economy collapsed, and while some steakhouses thrived (Manny’s, for example), Morton’s struggled.

Its clubby, often windowless digs once buzzed with bankers and lawyers, and in the case of the Minneapolis outpost, daily Pohlad sightings. But smoking laws shut the cigar bar, Carl Pohlad passed away, and businesses stopped spending. And the see-and-be-seen crowd chose the glam of Manny’s over Morton’s basement. The company closed in Minneapolis in 2009, and just this winter was sold to Houston-based Landry’s Inc., a restaurant holding company that controls disparate brands from Bubba Gump Seafood to Oceanaire.

Oceanaire’s founding chef, Wade Wiestling, remains with Landry’s as vice president of culinary development (based in the Twin Cities), and is the lead culinarian on the team reinventing Morton’s. “Morton’s was the last bastion of civility, power fine dining. That’s where it was,” he explains. “But we’re trying to boost growth at our 67 stores. We’re tweaking the ambience, music, uniforms, to attract a younger customer. Service has been sped up; people were sitting a half-hour before they placed an order.”

That means out with the tuxedos, no more meat trolley, and the LeRoy Neiman watercolors may not be long for the world. Wiestling has added entrÃ©es under $30 and the chain is looking for “high-visibility” locations to grow into. “[CEO] Tilman Fertitta wants Morton’s to be the premier steakhouse in the U.S.A.,” Wiestling notes.

As for the Twin Cities, restaurant insiders are speculating that the well-worn McCormick & Schmick’s (another Landry’s brand) on Nicollet Mall could be converted into a Morton’s. Wiestling’s comment: “Anything’s possible.”