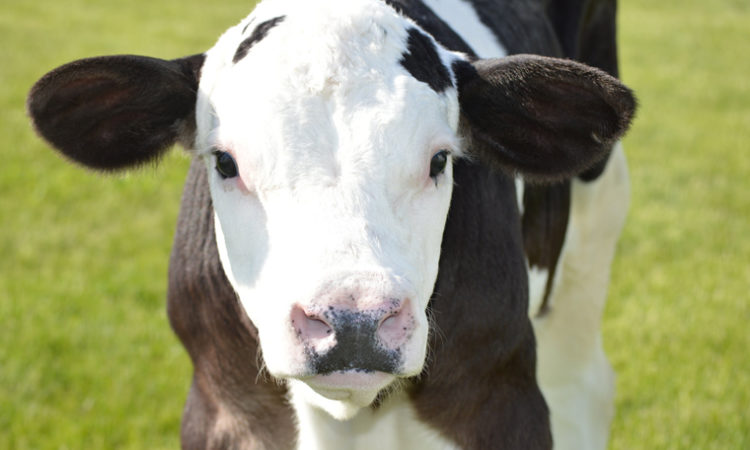 Recombinetics created a hornless dairy cow through the power of gene editing. Photo provided by the USDA.

The bioengineering company has a two-phase fundraising plan on its agenda, which it hopes will bring in about $50 million in new capital.
May 01, 2017

Recombinetics has nearly completed its latest funding round, raising about $7 million from 10 investors, according to a recent SEC filing.

Ian Friendly, the chief executive of the St. Paul-based bioengineering company, told TCB that he’s focused on securing the roughly $1.3 million remaining in the next few months. He also hinted at larger efforts on the horizon at Recombinetics.

Later this year, the company will kick off a two-phase fundraising plan, he said, starting with an investment round of up to $20 million and, sometime after that, yet another round with a goal of about $30 million.

“In total, we’re envisioning over the next 18 months to be in that $50 million range,” Friendly said. “My sense is it will be an ongoing effort, kind of like painting the Golden Gate Bridge, but we’ll have an initial close with a combination of institution and strategic investors.”

The influx of capital will be divided among several efforts, chief corporate affairs officer Tammy Lee Stanoch noted. “For starters, we’ll be able to scale the animal production business,” she said. “We have several clients that are medical device or pharmaceutical companies that are collaborators and are anxious for us to scale our production system so we can be their clinical partner.”

For confidentiality reasons, Recombinetics could not disclose who these partners were. However, companies and farmers have utilized Recombinetics’ technology not just locally and nationally, but internationally as well.

One of Recombinetics’ claims to fame was its development of “hornless” cows through the practice of gene editing. Farmers lauded the genetic alteration as it called for the end of a painful horn removing procedure that affects 80 percent of dairy calves and 25 percent of beef cattle.

The company has also made advancements in disease prevention and breeding traits among numerous species, primarily livestock, including pigs, sheep and poultry.

Looking ahead, part of the $50 million the company looks to raise will undoubtedly go toward IP protection, she added. Other funds will help commercialization efforts in its animal production business.

Moreover, the new capital will also mean new jobs. “Roughly speaking, that first phase would bring in about 15 people and the second phase would do roughly the same,” Friendly said.

Altogether, the company’s headcount, which currently stands at 35 full-time employees, is expected to nearly double.

With the additional staff, Friendly and Stanoch hope Recombinetics will have additional bandwidth to take on new projects.

“We don’t have a current gene-edited bird, fish or crustacean that I could tell you about because that’ll follow the customer [demand],” Friendly said. “We’ve identified targets, both customer targets as well as targets for what can be done, and we have a pretty good idea on how to do it. There’s a list the length of your arm that we could be working on, and we’re always balancing breadth versus depth.”