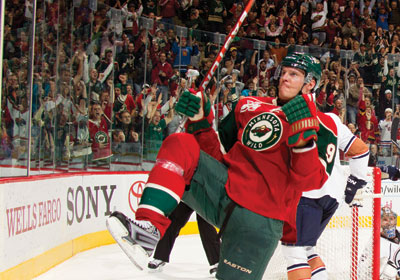 With incredible fanfare, the NHL team debuted in 2000 and made the playoffs three times in its first seven seasons. Then came an ownership change and three years of lackluster performance—a trend that lead investor Craig Leipold is out to reverse beginning with this season.
By Dave Beal
November 01, 2011

Bob Naegele cherishes his memories from the opening night in 2000 when he brought major-league hockey back to the state for the first time since the North Stars left for Dallas in 1993. While pregame testimonials played, the capacity crowd at the new Xcel Energy Center in downtown St. Paul chanted and cheered, raising its volume ever higher as the clock ticked down to the traditional “Let’s play hockey!” declaration to start the game. “For 20 minutes, they said, ‘I’m in love with this team,’ and the players hadn’t even hit the ice,” Naegele recalls.

The fans’ embrace of the Wild grew from that moment on, and the franchise reaped the benefits. With the low payroll costs typical of new expansion teams, the Wild netted the highest operating profit of any of the National Hockey League’s (NHL) 30 teams in 2003, according to Forbes magazine. That same year, and again in 2007 and 2008, the Wild made the playoffs, inspiring sellout crowds to pack the St. Paul arena for 409 straight games—the longest active sellout streak in NHL history.

But the unusually lengthy honeymoon for the Wild is over. Forbes’ latest accounting, for the 2009–10 season, reported the team had fallen to 16th in profitability, with an operating loss of $2.3 million—largely because its player payroll had doubled since 2002–03. Under new majority owner Craig Leipold, who bought the franchise in 2008, the team has missed the playoffs for three consecutive years. As a result, the Wild’s sellout string ended last season.

What happened? A few key trades didn’t work out. Some draft choices were disappointing. Injuries took a toll. The team was unable to find a top scorer to replace all-star right winger Marian Gaborik, who left to join the New York Rangers in mid-2009. And there has been significant management turnover. During his three years as the Wild’s owner, Leipold—who had only one coach and one general manager during his 10 years as the owner of the NHL’s Nashville Predators—has hired a new general manager and changed coaches twice.

Needless to say, it’s been a busy off-season for the Wild, as Leipold and his crew freshened up their business playbook in hopes of scoring better seasons.

During the summer, the Wild increased its advertising spending by 30 percent (primarily via social media) and boosted its sales and service staff to 32 positions from 20 a year earlier. The new hires are focused on luring lapsed season-ticket holders back into the fold, and selling new “all-inclusive” packages—tickets, parking, food, and beverages—to businesses that want to entertain clients and other VIPs.

To further inspire interest, the Wild bid for, and won, the opportunity to host the NHL’s draft in Minnesota this year—the first time since 1989 that the draft had been conducted in the state. While not something that directly benefited the team financially, it allowed the Wild to “talk about hockey in June, when it’s hot outside, and to bring people in to experience the draft at a time when we’re usually only talking baseball,” Leipold says. The draft attracted more than 17,000 hockey aficionados to the Xcel Energy Center over two days.

Perhaps the most important moves, though, are the personnel changes. This spring, General Manager Chuck Fletcher replaced Coach Todd Richards with Mike Yeo, the former coach of the Houston Aeros, the Wild’s farm team in the American Hockey League. During this year’s draft process, the Wild came away with two top local prospects—Wayzata’s Mario Lucia, son of University of Minnesota men’s hockey coach Don Lucia; and Eden Prairie’s Nick Seeler (see related story, page 32). The team also picked up from the San Jose Sharks the rights to highly regarded Charlie Coyle, a second-year forward from Boston University. And to beef up its anemic offense, the team made two bold trades with the Sharks, landing shooters Dany Heatley and Devin Setoguchi, who together scored nine more goals than the Wild’s two top scorers last season and are seen as capable of doing much better this year.

Next season, the Wild’s first-round draft pick in 2010, Mikael Granlund, and first-round pick in 2011, Jonas Brodin, are expected to improve the team’s performance even more. Both are obligated to play one season elsewhere first. “People are talking about what we’re doing,” says Leipold. “They like the trades. They recognized we weren’t shooting. We’re addressing what our weaknesses are.”

Farther up the ranks, Leipold’s management team appears to finally be jelling. Only a few key leaders remain from the Naegele ownership era (Naegele is still a minority investor). Among them is Denver sports consultant Jac Sperling, who is vice chairman of the team’s board. Another is Matt Majka, who has been with the team since day one; he is the chief operating officer and one of Leipold’s three top executives. The other two, who were brought in by Leipold, are Fletcher, former assistant general manager for the Pittsburgh Penguins; and Chief Financial Officer Jeff Pellegrom, former controller for the North American new products division and vice president of ventures for consumer products giant SC Johnson. (Leipold’s wife, Helen Johnson-Leipold, is a top SC Johnson executive and the great-great-granddaughter of the company’s founder. This year, Forbesestimated her wealth at $2.3 billion.)

Fletcher took over the GM post in May of 2009,—one month after his predecessor, Doug Risebrough was let go, and Head Coach Jacques Lemaire stepped down, following the team’s elimination from postseason play. Risebrough and Lemaire had held their posts since the team’s launch. Leipold had initially indicated Risebrough was a keeper. “Doug’s a winner. I really like Doug. I’ve always respected Doug, so I can tell you: high, high, high priority to keep him in here,” he was quoted at the time.

The son of hockey Hall of Famer Cliff Fletcher, Chuck Fletcher was with the Penguins during the 2008–09 season, when the team won the Stanley Cup. Since joining the Wild, Fletcher has overhauled hockey operations and, generally, engineered trade, draft, and other player personnel decisions designed to transform Lemaire’s emphasis on defense into a more aggressive system that focuses on offense. In 2009, Fletcher named as the Wild’s new coach Crystal native Todd Richards, who had been an assistant coach at San Jose. After only two seasons, though, Fletcher fired Richards in April, replacing him with Yeo.

With its draft picks, trades, new coach, and increase in back office support, the Wild is set to face off against the 2011–12 season. It’s a season that’s sure to be filled with inescapable uncertainties, including the economy, potential player injuries, and the team’s overall competitiveness. Yet powerful assets bolster the franchise’s financial outlook.

In each of the last five years, ESPN Magazine has ranked the Xcel Energy Center’s “stadium experience” as among the top three in the NHL. In 2007, the magazine rated the St. Paul arena as the best for all venues in the four major professional sports nationwide.

Of greater value are the Wild’s fans. It’s “the passion that people here have, not just for the Wild, but for hockey,” says Leipold. “I was surprised at just how deep it goes.” While attendance slipped last year, it was still at 99.7 percent of the Xcel Energy Center’s 18,064 capacity. And many fans continue to pepper Leipold with e-mails, typically within an hour after the game, and mostly when the team plays poorly. That “never [happened] in Nashville,” he says. “This is really unique [to] this market, that [the fans] understand the game that well, and that they are that passionate about it.”

That passion and knowledge of the game is woven into the culture of Minnesota. The rosters of NHL teams also reflect that culture. More college-level and NHL players are from Minnesota than from any other state. And since the Wild started, eight of its 90 draft choices have come from Minnesota. Only one other state, New York, has produced as many as two.

Interestingly, it’s the culture of hockey in Minnesota that helped lead to the Wild’s current ownership structure. The team’s second most significant investor, Philip Falcone, grew up on the Iron Range and was a star on the Chisholm High School hockey team. He went on to play for four years on Harvard University’s team and then for a professional team in Sweden. Most recently, Falcone, the founder and chief investment officer of Harbinger Capital Partners in Manhattan, partnered with Leipold to buy the Wild’s parent company, Minnesota Sports & Entertainment, for about $260 million. Leipold owns about 60 percent of MS&E Falcone has a 35 percent stake and 10 other investors own the rest.

Leipold, 59, a native of Neenah, Wisconsin, lives in Racine, and usually spends two days a week in St. Paul. He has a 10-year lease on the penthouse suite at the Saint Paul Hotel, a block from the team’s headquarters. Shortly before winning the Nashville expansion franchise in 1997, Leipold sold his Racine-based apparel company, Rainfair, Inc., for what he says was “in excess of $25 million.”

As with any business investment, Leipold, Falcone, and the Wild’s other owners expect a return some day. And the only way to ensure it is to manage the team back not only to profitability but into playoff contention. Such changes, however, often take years, and expectations for the 2011–12 season are low.

Last season, the Wild wound up 12th of 15 in the NHL’s tough Western Conference. To reach the playoffs, the team must make the top eight. Sports publications issuing outlooks are not high on that happening this season. The NHL Yearbook, published by the league, predicts a 13th-place finish; Hockey News says 11th; and Sporting News Hockey sees a tie for ninth.

Former University of Minnesota and North Stars great Lou Nanne thinks the Wild could still be two years away from the playoffs, but adds: “They’re sitting as well as any team in the NHL with youngsters.”

Reaching the playoffs is a must when it comes to raising the team’s value. After its strong run in three years ago, the Wild were sold to Leipold’s investment group for roughly twice the amount Naegele and his associates had invested in the franchise. But Leipold says his ownership group is in no hurry to sell.

“The fact is, you never know if it’s a good investment until you sell the team, whenever that is,” he says. “Right now, there’s no way we’re selling this team. We’re having too much fun. So we look at it as a very good investment. We think that at the end of the day, a team like the Minnesota Wild in a very strong market—Minnesota, the Twin Cities, St. Paul specifically—is in a great place to have a hockey team.”