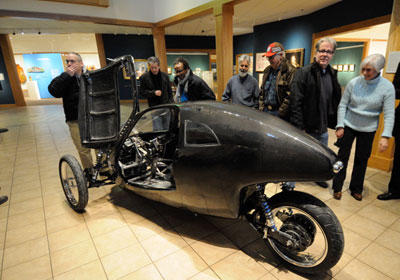 Rich Kronfeld has spent a good chunk of time in the last few years developing the Raht Racer: a three-wheel electric vehicle with pedals that’s capable of reaching highway speeds.

The prototype looks like something out of a movie, but next week Kronfeld will be in Chicago competing with 13 other companies for up to $1 million in funding in Clean Energy Trust’s 2015 Clean Energy Challenge. The competition is held on April 14. Competitors have developed products in the area of transportation, energy storage, smart buildings and devices and alternative power: biomass, solar, and wind energy.

“It’s a new experience. You pedal it and you go as fast as a car,” says Rich Kronfeld, founder and CEO of the Golden Valley-based Rahtmobile. “It’s essentially an electric vehicle.”

“Raht” is pronounced “rat” and stands for “recumbent automotive high-speed transport,” says Kronfeld. The vehicle has a lithium battery and an electric motor.

At this point, there’s only one Raht Racer in existence.

“The focus was building the prototype,” says Kronfeld of his work so far. “Now my focus is fundraising — getting the money in the door to develop it.”

Kronfeld is also trying to raise money through the Kickstarter crowd-funding web site. As of midday Friday, Raht Racer had drawn just under $29,000 in pledges towards its $75,000 goal.

In 2011, Kronfeld got a $50,000 grant from the state’s Department of Commerce to help develop the vehicle.

Raht Racer has been drawing other attention. It was featured earlier this year on the Science Channel’s “All American Makers” program. Kronfeld adds that he was also recently featured on Canadian television. He says that he’s starting to field inquires from potential distributors and investors.

His advisors include Scott Olson, who founded Rollerblade, Inc.

Electric vehicle inventor is a second career of sorts for Kronfeld, who was a notable Twin Cities actor and personality. He may be best remembered for his character Wally Hotvedt on the “Let’s Bowl” television show, which aired locally and had a short run on the Comedy Central network.

Kronfeld’s college degree is in theater, not engineering.

“I kind of have it in my blood a little bit. …My father and his two brothers were all engineers,” says Kronfeld. “I’m a good problem solver and I think I have good instincts.”

The prototype Raht Racer has been on display at the Bakken Museum in Minneapolis. Kronfeld is not driving the vehicle to Chicago, but transporting it on a trailer.

According to the company’s web site, the first generation versions of Raht Racer could retail for somewhere between $35,000 and $45,000.

The Clean Energy Challenge, an accelerator program that offers startups a chance at early-stage funding, has previously helped jumpstart 60 Midwest-based startup companies. Kronfeld says that his product is relatively simple compared to some of the technology startups that he’ll be competing with in Chicago.

“I’m honored to be in the same gene pool as these other companies. Whatever happens in Chicago, I’m fine with,” Kronfeld said. “I’m ecstatic to be able to be there.”